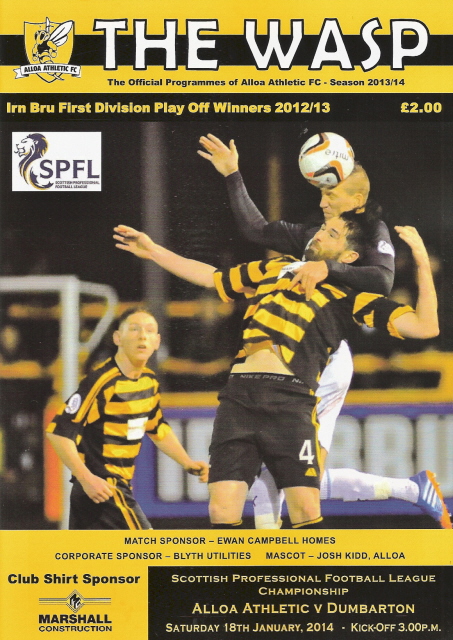 DUMBARTON stunned opponents Alloa Athletic with a thumping 5-1 win at Recreation Park, catapulting themselves into the SPFL Championship play-off zone in the process.

Manager Ian Murray was delighted both with the performance and with the result.

After the match he commented: "We knew what we were capable of and that included grabbing a place in the top four. But it's such a tight league, things can change quickly."

Jordan Kirkpatrick and Chris Turner got what turned out to be an epic clash underway. Early pressure from Dumbarton paid off when Mitch Megginson's cross was headed by Chris Kane onto the bar and over. It was a clear sign of things to come.

All the initial pressure was from the away side, and on eight minutes their endeavour was rewarded when a mark McLaughlin header from the centre of the box scrambled through the defence and into the net.

The initiative had begun with Scott Linton's long throw. It was a rather scrappy opening goal in the end, but welcomed enthusiastically by the players and visiting supporters.

Sons kept up the intense momentum. Alloa keeper Scott Bain was called into action to make a great save from a glancing header by Andy Graham, in a move that began with a free kick.

Next a speculative volley from Paul McGinn flew just wide of the post. This was turning into an all-action game.

Long throws from Linton were causing the home side all kinds of problems at the back.

A Chris Turner strike from 20 yards out fizzed just past the post again. Then Megginson put in a dangerous ball, but it was scuffed away by the Alloa back line for a corner.

Another great save from Bain pushed away a Colin Nish volley at the back post. Sons were on fire.

Just before the half hour, when Alloa were still struggling to get out of their own half, Dumbarton made it 2-0. A McLaughlin corner floated over to Turner, whose close-range header left the keeper with no chance.

The home side struck back immediately. Dumbarton goalkeeper Stephen Grindlay was called into action. He pulled off a spectacular close range save when a header from Kevin Cawley rattled in from the edge of the six-yard box.

On 37 minutes Chris Turner was rather harshly shown a yellow card for a robust challenge.

Four minutes later Dumbarton had a penalty. Chris Kane was flying through and Wasps' keeper Bain tumbled him over. The referee had no hesitation in pointing to the spot and producing another yellow card.

Kane took the penalty himself and right-footed the ball confidently into the goal, striking it high into the centre of the net.

There was a mini-flurry from the home side before half time, but Ross Caldwell's resulting left-footed effort was well blocked.

Dumbarton headed into the break 3-0 in front, and they certainly looked capable of more in the second half.

There were chances for both sides when play resumed. First, Cawley struck a menacing ball from outside the box for Alloa, but it flew high over the crossbar. At the other end, a further attempt from Jordan Kirkpatrick was blocked.

Grindlay made another good stop, this time from Liam Caddis. For Dumbarton, a header from Andy Graham was comfortably saved by Bain.

The Wasps went for a double substitution on 63 minutes, bringing on Edward Ferns and Andy Kirk in an attempt to turn the game around, but the overall shape of the match did not change a great deal.

Within five minutes of the Alloa changes, Kane, Kirkpatrick and Mark Gilhaney had all had good attempts on goal for the visitors, as they busily sought to extend the Dumbarton lead.

Alloa began pushing again. First, Kevin Cawley pulled a goal back for the home side with a right-footed shot from outside the box, after his previous effort had been well saved by Grindlay.

Then at 3-1 Daryl Meggatt came fairly close for the Wasps from 15 yards, following a set piece situation. It was a warning sign for Dumbarton not to allow things to slip further.

On 73 minutes Sons' gaffer Ian Murray made his first change of the afternoon, bringing on Garry Fleming for Colin Nish.

Two minutes later Mitch Megginson crossed the ball to Chris Kane, whose spectacular right-footed volley from eight yards out enabled him to claim his brace in decisive fashion and put Sons 4-1 in front.

At this stage it looked like an unassailable lead, but there was still more to come, as Sons went nap on 81 minutes through an amazing volley from Jordan Kirkpatrick.

In two final switches, Dumbarton brought on first Scott Agnew to replace Kirkpatrick and then Bryan Prunty for the industrious Mark Gilhaney.

Agnew came close with a trademark free kick from the edge of the area, before having another right-footed attempt saved in the top centre of the goal.

The last chance of the game went to Fleming, but he could not quite convert it to give Dumbarton the joy of six on an exhilarating afternoon.

It was a thrilling encounter from Sons' point of view, moving the team into fourth spot in the division.