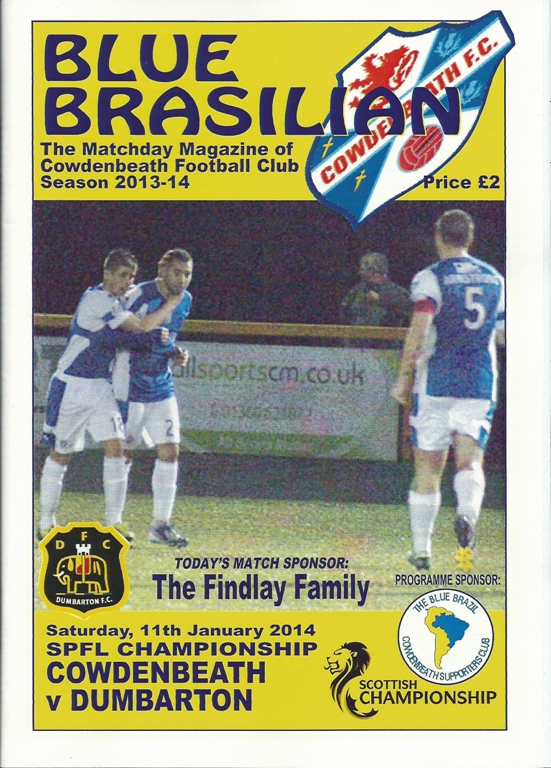 DUMBARTON pulled nine points clear of Cowdenbeath this afternoon, thanks to a deserved and hard-fought 4-2 victory at chilly Central Park.

Conditions were not easy on the pitch, and the game was preceded by several inspections to satisfy the necessary standards. But once the match got underway, it proved by turns absorbing and thrilling.

After the game, Sons gaffer Ian Murray was extremely pleased with his side's victory.

He told the press: “It was great to see Chris Kane get on the score sheet again. He has started his career in senior football very well with two goals in two games.

“Mitch Megginson hadn't scored for a few weeks so he really needed that, as well. He works very hard and is always dangerous, so I was delighted for him.

“Also, that was only big Nish's second goal of the season, so it's nice to see all the strikers on target. And guys like Bryan Prunty and Steven McDougall are a threat up front too, so we're well served in that department.”

However, a day which ended so positively for Dumbarton did not begin nearly so well, with the visitors conceding an early goal due to an unfortunate mix-up at the back.

Kyle Miller put the home side in the lead after just three minutes. Stephen Grindlay's clearance was blocked by Jamie Stevenson, who put the ball across goal for Miller to tap home with infuriating ease.

Hardly had the regrets been absorbed, however, before Sons found themselves level in the game at 1-1.

Big striker Colin Nish, coming back from a barren spell in front of goal, did the damage, finishing well as he pounced on the ball and put it into the bottom corner of the net from 12 yards out.

Next, Mark Gilhaney fired wide after Nish flicked on to Chris Kane and he laid the ball back to the tricky winger.

At the other end, Grindlay rescued Sons with a fabulous save to stop a certain goal from a few yards out. Chris Turner then headed for the line, hooking the ball away.

Paul McGinn was also proving a danger man for Dumbarton. His cross found Nish, who headed just past the Cowden post.

On 21 minutes, Sons' recovery was complete and they finally had their noses in front.

The ball broke to Megginson in the middle of the park. He barged his way past a defender, shrugging off the challenge and finishing impressively past Thomas Flynn in the Blue Brazil goal to make it 2-1.

Five minutes later, the tables had turned yet again. Grindlay grasped vainly at what looked like a simple cross, allowing Stevenson in to strike the ball home and pull the score back to 2-2 for Cowdenbeath.

It was a sickening moment for the away support, and the players took a little time to settle down on the pitch, too. The match began to shift from up-tempo to slow-grind.

Sons had a decent opportunity to reclaim the lead when McGinn burst through the home defence, but then fired over the crossbar with only the 'keeper to beat.

Shortly afterwards the industrious wing back had another go, this time firing a little wide of the top corner from around 25 yards.

At half time, after considerable efforts from both sides, the game was still even in spite of four goals on the score sheet.

The second half started tentatively. But five minutes after the restart Dumbarton were in front once more.

Young loan striker Chris Kane's initial effort was palmed away, put back across goal by Gilhaney, and sure enough Kane was there to tap the ball home for 3-2. There was wild celebration among travelling Sons supporters.

Another great save from Grindlay tipped a powerful Stevenson free kick onto the bar as Cowdenbeath hit back.

Next, Kyle Miller had an attempt from the centre of the box, but his shot went wide to the left.

Just after the hour, the home side made a double substitution. It was a clear statement of intent. Cowden were desperate to get something out of this game.

But Dumbarton proved themselves up to the challenge. As they returned to the offensive, Colin Nish shot from 18 yards. His curling drive went close, but missed the post on the right.

McGinn went into the referee's book for an infringement, meaning that he is set to miss the upcoming home clash with Livingston in a fortnight's time.

On 66 minutes, Grindlay again saved a free kick from the menacing looking Stevenson.

Five minutes later, Dumbarton boss Ian Murray made his first switch of the afternoon, with Scott Agnew replacing Jordan Kirkpatrick, who had enjoyed another good game.

Cowdenbeath began to pile on the pressure once more, testing Sons' resolve at the back. It was holding.

On 79 minutes Dumbarton took of the promising Kane, replacing him with midfield stalwart Garry Fleming in an effort to steady the ship in the centre of the park.

Nish and Agnew came close for Sons, with a half volley and a clipped shot respectively. But it was Megginson who effectively wrapped up the game with the visitors' fourth goal of the afternoon on 83 minutes.

It was a similar one to the third, with Gilhaney crossing and his strike partner being available to knock it home with ease.

At 4-2 Dumbarton looked safe, but they were rightly taking no chances. With four minutes on the clock, Colin Nish, who had put in a decent performance, gave way to Bryan Prunty.

Scott Agnew tried a trademark free kick, but it flew just high and wide. Then Garry Fleming chipped over the bar.

When the referee finally blew the whistle, Dumbarton had secured a vital three points to move a full nine points clear of their opponents and 17 points clear of bottom club Greenock Morton.