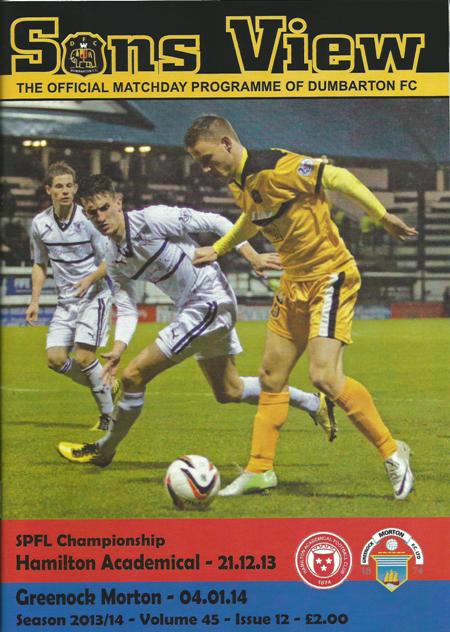 DUMBARTON secured a vital three points with a win against first foots of 2014, local rivals Greenock Morton, at the Bet Butler Stadium.

In the opening 45 minutes of a cold, wet afternoon, Sons enjoyed significant periods of dominance but struggled to find a killer blow in the final third until a penalty on the stroke of half time.

After the break, Morton came back into the match somewhat, but it was Dumbarton who achieved the killer blow in the encouraging 2-0 victory.

He said: "We played better last week against Dundee but didn't get the breaks and the players deserve credit for working hard and getting the three points today."

Both sides began in fairly tentative fashion, seeming to realize how important this game was in terms of the struggle against relegation and downwards play-off spots in the SPFL Championship.

As Sons began to move forward, a corner was cleared as far as Mitch Megginson, who whipped the ball back in for Colin Nish to put a glancing header wide of the post.

The early chance seemed to motivate the home side. They mounted several promising looking assaults on the Ton's back line.

Bryan Prunty got in front of his man to head in a Mark Gilhaney cross from the centre of the box, again just missing the target to the left on ten minutes.

Moments after picking up a booking, Megginson was in the action again. On the break from a free kick, the Dumbarton forward drilled the ball just wide from 18 yards, past Nico Caraux in the Morton goal.

Then a Jordan Kirkpatrick shot was deflected wide after a great switch ball from Chris Turner, a good flick inside from Paul McGinn, and a lay off from Prunty. Fine teamwork from Sons.

It was all Dumbarton in terms of threat at this point. Although Morton were getting hold of the ball, they were no threading together passes consistently enough and were failing to find a way through the home side's well organized defence.

In particular, Chris Turner, Andy Graham and experienced debutant Mark McLaughlin were forming a strong spine for Dumbarton at the back.

There was drama on 17 minutes. Bryan Prunty dispossessed Thomas Pecier some 25 yards out. He was tripped as he tried to race past the defender, with the referee reaching for a card and Sons supporters appealing for it to be red. Official Kevin Clancy was unmoved and dispensed a yellow.

The Ton's first real chance came when Reece Hands right-footed a shot in from the centre of the box. The effort was well saved in the bottom right corner by Sons 'keeper Stephen Grindlay.

In another attack, Prunty fired over the crossbar from a tight angle after Nish had nodded the ball down.

On 25 minutes Chris Turner put in a robust challenge to stop and rob Kabba-Modu Cham. He clearly won the ball, but the referee adjudged it a foul and dispensed a harsh booking for the infringement.

Paul McGinn was having a good game for Sons, both at the back and moving forward in partnership with Gilhaney. He put in a fine cross, but there was no one there to take advantage of it and Caraux was able to collect safely.

Minutes later Fouad Bachirou had the ball in the net for Morton, but he was ruled offside before the ball went in. The incident nevertheless served as a warning for Sons, who were otherwise well on top.

The ball broke to Colin Nish in the area, but he slipped just as he was about to pull the trigger.

Then Dumbarton had the ball in the net, but again it did not count. McLaughlin's crafty back-heel was pushed home by Graham, who was rightly called offside.

As Sons continued to press, Mark Gilhaney worked his way through and cracked in a left-footed shot from outside the box. He was close, but just missed the goal to the right.

It looked as if Dumbarton's dominance in the opening 45 minutes was to go unrewarded. But then Chris Turner fired in a shot from 25 yards out on almost the stroke of half time. His effort was blocked by Reece Hands' arm, and the referee pointed straight to the penalty spot with Morton protesting.

Up stepped popular forward Bryan Prunty. He placed his shot with power to the left, leaving Nico Caraux floundering in the middle of the goal as the ball hot the back of the net and Dumbarton went into the break deservedly 1-0 in front.

In the second half, Morton began to push back, claiming more of the possession and often forcing Sons to defend in depth.

As the half progressed, it seemed that Dumbarton's line was moving further back, while flexibility and movement was lacking in the middle of the park. It was a difficult period of the game for the home side.

Hands had a good chance to atone for his earlier mistake and level for Morton, but he put the ball wide from 15 yards out.

At the other end, there was a great effort from Sons' Mitch Megginson. His dangerous looking shot went just over from 20 yards on the volley.

The Greenock side tried to shuffle their pack by bringing on
Aiden Fulton and Archie Campbell for David Robertson and Reece Hands on 53 minutes and 60 minutes respectively.

The visitors were looking occasionally threatening, but their overall game continued to lack coherence and pace, allowing Dumbarton back in.

Jordan Kirkpatrick had another shot from 25 yards out, but could not add to the score line for Sons.

Then gaffer Ian Murray made his first substitution on 68 minutes, with Bryan Prunty getting a huge ovation from the home support as he gave way to equally well-received new boy Chris Kane.

Five minutes later, as Ton continued to work for an equalizer, forward Kirkpatrick came off to allow Hugh 'Shug' Murray to shore up the back for Sons.

With just under 20 minutes left to play, the game was far from over and the visitors were not giving up. Full-back Scott Taggart lashed the ball wide from 20 yards.

Morton were on top now. But when Dumbarton broke they looked menacing. Mark Gilhaney shot from the edge of the area after a good move, but his effort was easily saved by Caraux.

Finally, on 81 minutes, the second goal came for Sons. Nish was through on goal. His first effort was unsuccessful, but somehow he managed to hook the ball over the 'keeper, leaving debutant Chris Kane to run in and head home from six yards out to make it 2-0.

It was a good denouement to a solid performance from Dumbarton, who held out in the remaining nine minutes of the match, despite pressure from an increasingly forlorn looking Greenock Morton.

Darren Cole had headed over the bar for the Ton, and then Stephen Grindlay did well to tip over a corner before the referee finally blew the whistle on an absorbing contest.

Paul McGinn, who had been been superb for Dumbarton, moving effortlessly up and down the touchline all afternoon, was rewarded for his efforts by being named Sonstrust Man of the Match.

Sons are now 15 points ahead of the Cappielow side. Sitting on 24 points, they are 7th in the division, moving up one place from the previous week.