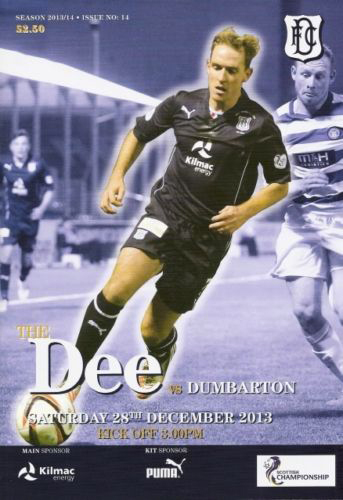 DUMBARTON endured a disappointing end to 2013 at Dens Park, finding themselves well beaten in spite of putting on a determined, professional and skilled display.

Ironically Dundee's victory put them back on top of the SPFL Championship, replacing Hamilton Accies, who had been toppled by Sons with a fine 2-1 win last week.

After the game, gaffer Ian Murray reflected on a goal that might have been, from Garry Fleming: “Everyone thought the ball was over the line apart from the two people who count,” he said.

“We more than merited a goal and that was at a key point in the game.”

For the first five or six minutes it was all Sons. Prunty got in behind the Dees' back line and pulled the ball back, only for it to be cleared.

Given plenty of room beside the pitch, Scott Linton pulled off the first of a series of trademark long throws, forcing Kyle Letheren in the Dundee goal to punch clear.

The first real chance went to the home side, however. Gavin Rae worked his way to the edge of the box, assisted by Kevin McBride and Peter MacDonald, but fired over the bar.

Suddenly, the balance began to shift. MacDonald's shot was deflected in by Martin Boyle. Dumbarton 'keeper Jamie Ewings pulled off a spectacular save, punching in one direction while his body was moving the other way.

Sons were performing well in defence, under some duress. Two corners from the Dark Blues had to be cleared in quick succession.

A weak header from Nick Riley was blocked. Then Macdonald fired in a powerful volley, which was well claimed by Ewings.

At the other end, Jordan Kirkpatrick saw his slightly off-balance effort fly past the post.

Perhaps Sons' best chance of the game came when Bryan Prunty set up Garry Fleming, who found himself in possession just beyond advancing 'keeper Letheren. He controlled well but took too long to shoot, and his effort was stabbed away by Declan Gallagher.

This was by far Sons' best spell in the first 45 minutes. Kirkpatrick fired in from the edge of the box, but Irvine deflected the shot wide for a corner.

Letheren made an accomplished save from a Prunty header, before parrying away another Kirkpatrick attempt.

Still Dumbarton could not get the ball into the net. The game just didn't seem to be running their way up front, while at the back the visitors' defenders were called upon to make a series of important stops.

In Dundee's last attack of the opening period, Jim McAlister, who had shifted to the right after Ryan Conroy replaced an injured Riley, blasted the ball over the bar from a good position.

The second half began in the worst possible way for Dumbarton. After being pressed back, Rae and McAlister combined for the Dark Blues, putting the ever-dangerous MacDonald through. He fired across Ewings from 16 yards out, putting the home side 1-0 in front.

Shortly afterwards came the most controversial moment of the game. Paul McGinn's cross evaded Kyle Letheren. At the end of a goalmouth scramble, the ball was pushed home at close range by Garry Fleming.

Sons players rushed to celebrate, but to the astonishment of everyone in the ground, referee Colvin thought that the ball had not crossed the line. Captain Andy Graham was booked for his protest, and manager Ian Murray was also spoken to by the officials.

Dumbarton tried even harder to get on the score sheet. A fantastic save from Letheren tipped a curling effort from Prunty past the post.

Dundee hit back from McAlister, whose strike from 18 yards out went wide. Riley also had an attempt.

An impressive Mitch Megginson volley from a similar distance seemed destined for the top corner of the net. But somehow, Letheren, named Dundee's Man of the Match, got the ball away.

Sons had their tails up now. Two consecutive corners followed, but the endeavour shown in the build up was not rewarded.

With twenty minutes to go, the second key turning point in the match arrived. The industrious and determined Chris Turner had to be replaced by Steven MacDougall for Sons.

Jordan Kirkpatrick went on another good run, but the finish went high over the crossbar.

A period of Dumbarton dominance was not translating into goals. A Nish header lacked power. The visitors looked threatening but not deadly.

On 81 minutes Dundee administered the killer blow. Kevin McBride took the ball wide on the right. His shot from 20 yards out was fast and high, giving Jamie Ewings no chance.

Kevin Smith came on for Garry Fleming on 82 minutes, but he had little opportunity to work his way into the game.

Andy Graham put in a superb stop at the far post as the Dees pressed forward, denying them a third goal.

However, two minutes before the end of regular time, the Dark Blues seized a further chance.

A good cross from Carlo Monti, put through by Jim McAlister, fell to Peter MacDonald 12 yards out.

Another clinical finish into the bottom corner made it 3-0 to Dundee – a score line that did little justice to the quality and effort Sons had demonstrated.

The statistics showed that Dundee had enjoyed 55% of possession and twice as many shots on goal, but in other respects Dumbarton had put on one of their best performances of the season so far, with little luck and no reward.