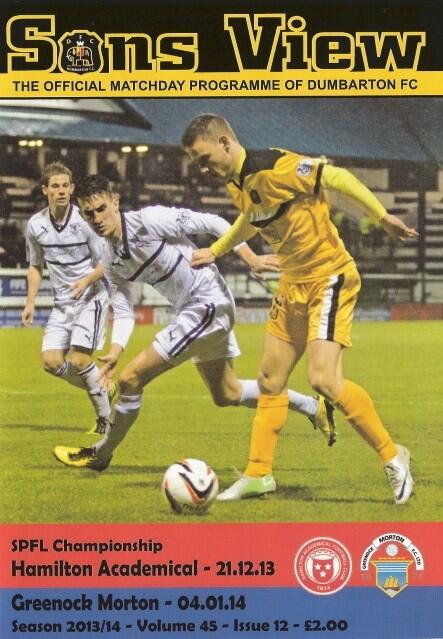 DUMBARTON celebrated their last home match of 2013 with an impressive win against Championship leaders Hamilton Academical.

In the process, Sons captain Andy Graham – rightfully named the Sonstrust Man of the Match – grabbed what turned out not only to be the winner, but also the 200th league goal that the men from the Rock have scored against Accies in League football.

Speaking after the match, an evidently delighted Sons boss Ian Murray said: "It was an open game . . . and a deserved win for us in the end."

Garry Fleming and Mark Gilhaney got proceedings underway, with Sons shooting away from the home support.

Early on, Graham nearly got on the end of a Scott Linton Linton free kick. In the end it proved a simple catch for Kevin Cuthbert in the Hamilton goal.

But it was the visitors who had the first serious chance. Ali Crawford let fly from 25 yards. His effort cracked against the bar before being put behind by Paul McGinn for a corner.

Then suddenly, with just 11 minutes gone, Dumbarton found themselves in the lead.

Bryan Prunty fed the ball into Garry Fleming, who fired across Cuthbert with his right foot and into the net.

Hamilton came straight back. A dangerous looking shot from James Keating was stopped by Jamie Ewings.

At the other end, Mitch Megginson latched on to a ball in the centre of the area, but Cuthbert was on hand to block it.

A marvelous piece of skill from Linton saw him beat two players from the wing and float in a curling shot from his weaker foot which narrowly skimmed the bar.

There was another opportunity for Accies when Darian MacKinnon fired in from 18 yards, just wide of the post.

A fine, flowing attack from Sons set up Prunty in the centre. It looked as if he was certain to score, but somehow Cuthbert got his legs to the ball, parrying it away.

However, it was Accies who broke back just after the half hour, when Mickael Antoine-Curier got in behind Sons' defence and set up a simple finish for James Keatings.

Sons responded first from Megginson, whose strike from the left side of the box went wide, and then from Aaron Barry, who fired over the bar from a central position after a good cross from Linton.

If Hamilton had enjoyed more of the early possession, the end of the opening 45 minutes was mostly Dumbarton traffic. But no further goals were forthcoming before the break.

In the second half, Sons pushed forward with determination when the opportunity arose, occasionally looking vulnerable at the back as Accies pressed them.

It was proving a fast-paced, entertaining game, and for the opening spell of the final period Hamilton showed their class and were well on top.

A chance came for the home side to take the lead when Prunty, who had been limping after a strong tackle from Crawford, got in behind Accies' defence and tries to put the across for Kirkpatrick.

However, Cuthbert spotted the move and collected comfortably.

For Dumbarton, Ewings made a good save to deny Antoine-Curier as the game really began to heat up.

A last ditch tackle from Hugh Murray, reasonably adjudged to be a foul, prevented a breakthrough for Accies. The Sons defender received a yellow card.

Andy Graham got into the defensive action with two fine blocks. Barry also cleared the lines for Sons as the pressure on them mounted.

On 71 minutes Dumbarton went back into the lead. Mark Gilhaney swung in a corner. Garry Fleming set up Andy Graham, who bundled the ball home right on the far post – though he probably knew little about it.

Shortly afterwards, Sons gaffer Ian Murray made his first substitution of the afternoon, bringing on Colin Nish for Fleming.

The big striker immediately began to hassle and harry. But while he did well with the ball at close range, his finishing proved awry.

One chance came from an angled volley, but Nish scooped the ball over the crossbar.

It was his good work that created the last chance of the game for Jordan Kirkpatrick, who fired just over.

In the intervening minutes, Hamilton Accies flung everything they had at the home defence in the eventually vain hope of grabbing an equaliser.

But Sons hung on for a vital, morale-boosting win following a disappointing fortnight.

The victory, in the final game of the year at the Rock, put Sons back into seventh place in the SPFL Championship.

The positive result also set up the team well for a demanding away trip to see out 2013 at Dundee on Saturday 28th December.