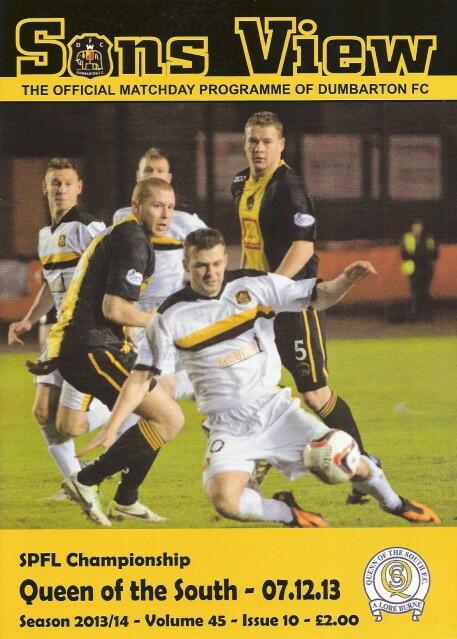 DUMBARTON lost out to Queen of the South in a tough, physical, sometimes stolid game at the Bet Butler Stadium.

Overall, the Sons enjoyed more possession throughout the match, but for some significant periods — especially in the first half — they were stretched and outpaced by the visitors.

Speaking immediately after the game, gaffer Ian Murray commented: “We are frustrated more than anything. It was a poor game and a poor goal that won it.

“We huffed and puffed and gave it our best shot but we didn't create enough.

“I thought it was a very, very scrappy game from the first minute to the last.

“It is hard to be too critical of the players because they have given us everything so far.”

Players and officials gathered in the centre circle before kick-off to share in a minute's applause to celebrate life of Nelson Mandela — a gesture shared in other football grounds across the country.

Kevin Smith replaced Bryan Prunty up front for this game. Otherwise the side was the same as the one that had drawn 1-1 against Alloa Athletic in midweek.

Both sides had early half-chances when the game got underway.

Burns saw a header go over the bar for the Doonhamers.

Then Sons' Jordan Kirkpatrick cleared off the line from Durnan after Lyle headed a corner back across the area. Queen of the South were enjoying too much time.

At the other end, Kirkpatrick struck his effort wide and into the fencing behind the goal.

On 15 minutes, Queens went ahead, and it was ex-Son Iain Russell who played the largest part in inflicting the damage.

He fired a shot towards the net. Dumbarton captain Andy Graham was unable to do anything other than deflect it past 'keeper Jamie Ewings for what turned out to be the only goal of the game.

Sons pressed back. Kevin Smith almost created an unusual equalizing chance as he beat Queens goalie Clark to the ball. He lobbed the 'keeper, but Clark got back to the ball just in time.

The Doonhamers were still looking confident, and at times dominant. Durnan headed wide from a corner. Sons were still appealing for a foul against Chris Turner, giving their opponents too much time once more.

Jamie Ewings showed his worth when he pushed a Mitchell free-kick round the post, before a McKenna drive from range went just wide. He also got down well to save from Lyle.

At half-time the Doonhamers were still a goal in front, and could have been even further ahead but for sharp reactions from the Sons 'keeper.

After the break, Dumbarton began to show a little more endeavour. Scott Linton had a shot from distance deflected high and into Clark's hands.

There were few clear opportunities for either side — as much a comment on lack of inventiveness up front as on defensive prowess, it might be said.

On the hour Sons boss Murray decided to freshen things up, bringing on Bryan Prunty to replace Mitch Megginson, who had actually looked quite sharp up front.

A few minutes later the gaffer decided to take Kevin Smith off, giving Colin Nish a chance to show what he had to offer.

A free-kick from Jordan Kirkpatrick missed everyone and bounced into the hands of the Doonhamers' 'keeper.

Prunty then flicked a good Nish cross towards goal, but to no avail.

The game developed a slightly angry edge when Prunty and Russell clashed a couple of times.

But though he clearly felt that he was more sinned against than sinning, it was the current Dumbarton striker, rather than the ex-Son, who ended up in the referee's book.

Steven McDougall came on to replace the busy Kirkpatrick on 73 minutes, in the final substitution of the game for Dumbarton.

Perhaps Sons' best chance of the game came 12 minutes from the end, when Prunty hit the ball just wide of the Queens post from the edge of the area after a neat Nish flick.

However, the visitors held on to claim all three points. Indeed they almost snatched a second goal when Ewings was caught off his line in time added on.

It was a disappointing and rather dull afternoon for the men from the Rock.