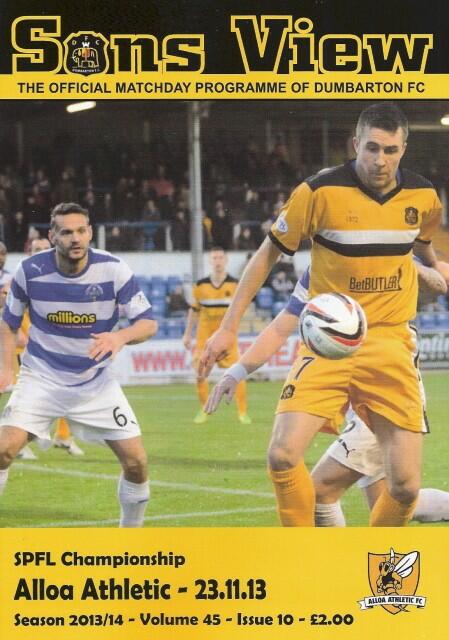 A fine individual goal from each side gave Dumbarton and Alloa a share of the points in a 1-1 draw at the Bet Butler Stadium on a cold Wednesday evening, moving Dumbarton up to sixth in the SPFL Championship.

Kevin Cawley put the visitors 1-0 ahead in the first half, but Bryan Prunty equalised with his third overhead kick in three consecutive seasons in the second half.

Dumbarton started well. A cross from Paul McGinn fell to Prunty's feet. The striker took a touch, but it was neither a shot or a pass he got away and the ball went out for a goal kick.

McGinn and Prunty linked up again soon after. McGinn put in a ball and Prunty went for an overhead kick. However it wasn't his best effort and he missed the ball.

Mitch Megginson had a chance for Sons shortly after, but he shot over from 18 yards.

Alloa were dangerous on the break, and had a good chance to go ahead from a well worked corner routine. Stephen Simmons was the man who fired over the bar, and the fence behind the goal, from the pass.

Just after midway through the first half, the Wasps went 1-0 ahead.

Cawley had the ball on the left-hand side of the box, turned his man and curled the ball across Jamie Ewings into the far top corner.

Dumbarton immediately responded. They should have been level before the break coming close on several occasions.

First, Jordan Kirkpartrick got past four men, drove forward with the ball, but hesitated over his shot on the edge of the area and the chance was wasted.

Then Alloa cleared an effort off the line after Prunty flicked Kirkpatrick's corner towards goal.

Finally, Mark Gilhaney had more time than he thought in the box, scuffing his shot from 12 yards over the bar.

Within the first 10 minutes of the second half, Megginson, Kirpatrick and Scott Linton all had efforts from distance go over the bar for the home side.

Alloa still looked for the goal that would all but seal the points, and came a few inches way from doing so when Simmons' swerving shot cracked the post.

Then, with just over 10 minutes to go, another piece of individual skill resulted in the second goal of the game.

Gilhaney's cross was met by Prunty, back to goal, and he fired in an overhead kick into the bottom corner of the net to level the game. It was his seventh goal of the season.

Dumbarton kept up the heavy pressure going into the closing stages, but it was Alloa who came close to stealing the points.

Substitute Declan McManus knocked the ball down for goalscorer Cawley. However his half volley skidded just wide.

One goal each proved the final score, and Dumbarton go into Saturday's clash with Queen of the South on a three game unbeaten run.