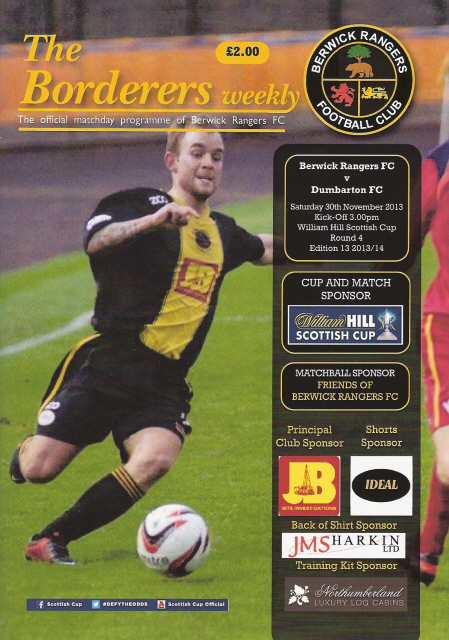 DUMBARTON progressed through to the fifth round of the William Hill Scottish Cup for the first time in 29 years, with a deserved win against League One opponents Berwick Rangers.

Goals either side of the break saw the Sons through, despite an early setback. The visitors had more of the possession, but the home side put up a sturdy performance.

The match – which started with a minute's silence for the helicopter crash victims in Glasgow – was played in freezing conditions and on a difficult pitch.

Despite a fair bit of attacking play, especially in the second half, both sides only had seven clear chances on goal each, two of which were directly from set-plays.

Of the first half penalty that revived Dumbarton's fortunes, gaffer Ian Murray commented afterwards: "It probably was handball, but it's hard because no-body knows what's a penalty and what's not a penalty, it's up to the referee. If it's against my team I'm not happy, but we were screaming for it on the sidelines."

The Wee Rangers' goalkeeping coach Gary O'Connor had been getting ready to come on, as on-loan regular number one Paul Grant was refused permission to play from parent club Hibernian.

Dumbarton pushed forward from the kick-off with swift passing movements. Berwick showed their intent by marking tight and challenging hard.

Then during their first attack, with only seven minutes gone on the clock, Rangers won a fairly soft free kick 20 yards out on the right-hand side of the area.

Lee Currie swerved in a curling shot that caught Sons 'keeper Jamie Ewings off-guard as it headed for the top corner. The home side were 1-0 ahead, against the initial run of play – though the match had hardly begun to settle down.

Sons pressed back. They forced four corners in quick succession, but struggled to break down a tight Berwick back line. The game looked as if it was getting bogged down.

Then on 28 minutes thee was a break through for the visitors. Berwick's Stephen Tulloch was adjudged to have handled the ball on the edge of the area.

Despite 'keeper Bald going the right way and getting a hand to the ball, Bryan Prunty confidently converted the penalty, to the delight of the visiting fans, to make it 1-1.

Berwick looked shocked. They mounted a counter attack, coming close from a corner. The Dumbarton back line managed to scramble the ball clear.

Devon Jacobs' right-footed shot from outside the box was blocked.

Just before the break, Sons took the lead. Mitch Megginson, assisted by Mark Gilhaney, drove a left-footed shot from outside the box into the bottom right corner of the Berwick net.

Dumbarton went in at half-time 2-1 in front, perhaps a touch fortunately, having secured two out of three of their only chances in front of goal.

As the second half began, the game began to open up and was soon swinging from end to end, as Sons looked to consolidate their advantage and Berwick sought to break back.

Two minutes later, Damian Gielty hit the ball over Dumbarton's bar from just outside the box. The warning signs were clearly there for the visitors.

Sons won a corner, but could not do anything with it. Berwick came back, forcing a free-kick on the right side of the field.

On 56 minutes Sons relieved the suspense for the visiting fans by going 3-1 in front.

This time it was Megginson who set up Scott Linton, who weaved through Rangers' defence and fired home from the left side of the box into the bottom right-hand corner of the net, giving Bald no chance.

There were further good chances for both sides. First Dumbarton's Kevin Smith hit the right post with a header from the centre of the box, after a good set up by Gilhaney.

Then Berwick's Darren Lavery hoofed over from the right before being taken off for Josh Morris.

For Dumbarton, Bryan Prunty shot wide of the post from a well-worked corner. Sons were producing some flowing football at this stage.

Kenny O'Brien was brought on for Ross Gray in the third and final substitution for the home side on 70 minutes, while Colin Nish replaced Prunty for Sons.

Nish was soon in on the action. He cut into the box and fired in a shot which was parried away by Bald.

Shortly afterwards the big front man had the ball in the net for what looked like a fourth Dumbarton goal, but it was ruled out for a touch on his hand as he controlled it.

Sons saw out the game safely to claim a convincing win and progress to the next round of the Cup.