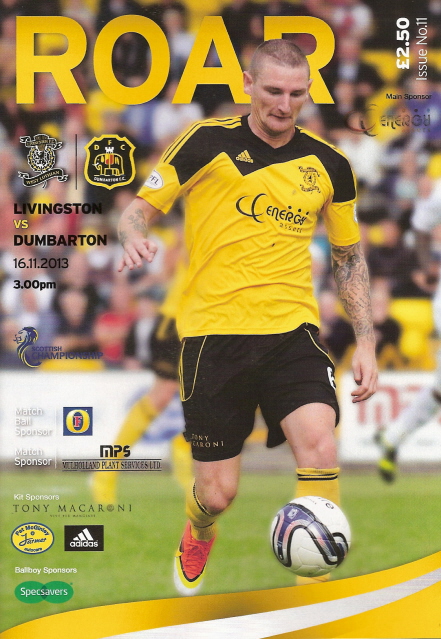 A SPIRITED performance, especially after an early setback, saw Dumbarton gain a deserved and vital victory on the road at Livingston this afternoon.

After the game, Sons boss Ian Murray commented: “It's a great result which puts us back in the pack. We were outplayed in the first half but we won quite comfortably in the end.”

Both teams looked determined from the outset, with Livingston proving especially threatening as they soon began to pin Dumbarton back.

During an attack on three minutes, referee Stephen Finnie was unhappy at the ease with which Livi striker Marc McNulty went down in the area. He promptly produced a yellow card for simulation.

It was one of six bookings, three within the first 18 minutes alone, in a game that certainly proved vigorous and energetic, but was in no way rancorous.

Ironically, just as Dumbarton started to create some chances themselves, Livingston broke away and took the lead.

First, Jordan Kirkpatrick, who had another fine game, latched on to a lay-off from Mitch Megginson. However, his contact was thin and the ball went wide.

At the other end, Andy Barrowman turned Aaron Barry, but then clipped his shot off the side netting.

Sons 'keeper Jamie Ewings was also called into action to clear a dangerous looking ball off the line with Martin Scott steaming in.

The opener came after Colin Nish lost possession. Coll Donaldson floated a ball in towards, McNulty who adjusted and fired home in one movement. It was a stunning strike to put his side 1-0 in from on 19 minutes.

Shortly afterwards the Lions nearly had a second, as a strike rattled against Sons' crossbar from a corner.

Livingston continued to pile on the pressure and could have gone further ahead. Shortly before half time, however, Sons struck back.

Andy Graham trapped the ball on the edge of the six-yard box, with his back to goal. He set up Mitch Megginson, who unleashed a mighty shot across the goal into the top of the net to make it 1-1 at the break.

Dumbarton started the second half with the increased pace and pressure that they had lacked in the opening 45 minutes.

Kirkpatrick soon had a shot saved by Kevin Walker in the Livingston goal, before Nish fired over from close range. It should have been the moment Sons took the lead.

On 41 minutes that moment came from the penalty spot. Paul McGinn was fouled by Connor MacDonald in the area. It was a clear decision for the referee.

Chris Turner duly stepped up to fire the ball past Walker to make it 2-1 to Sons, to the delight of the visiting supporters. The keeper went the right way, but could not block the strike.

Livingston began to raise the pressure themselves, and the match turned into a frantic, end-to-end competition.

Meanwhile, the Lions had a penalty claim on their own, and Sons' Chris Turner was harshly booked for diving when it looked as if he had been barged off the ball, although not necessarily unfairly.

At the back, Dumbarton shut up shop as Livingston surged forward, but at the risk of being held too far back.

However, the match was wound up on 74 minutes by Bryan Prunty.

In an impressive move, Jordan Kirkpatrick swept the ball across the park to Mark Gilhaney. The tricky winger wrong-footed the Livingston defence to create a chance for himself in front of goal.

Spotting Prunty unmarked, he chose to pass instead, leaving the popular front man with a relatively simple tap-in. He made no mistake and Dumbarton were 3-1 in front.

On 78 minutes Sons gaffer Ian Murray brought on Steven McDougall to replace Mark Gilhaney, who had sustained a knock.

More attacking momentum inevitably followed from the home side, with three corners being conceded in quick succession and a scramble in the visitors' area.

Scougall, Barrowman and McNulty had looked especially threatening for Livingston at different stages of the match.

For Dumbarton, Andy Graham had a chance with a header from the centre of the box. It went close on 86 minutes, but missed the target to the left. The cross came from Agnew, with good build up play from Kirkpatrick.

Livingston pressed hard into the third minute of time added on, when the referee's final whistle produced celebrations from Dumbarton fans for the securing of another important three points.