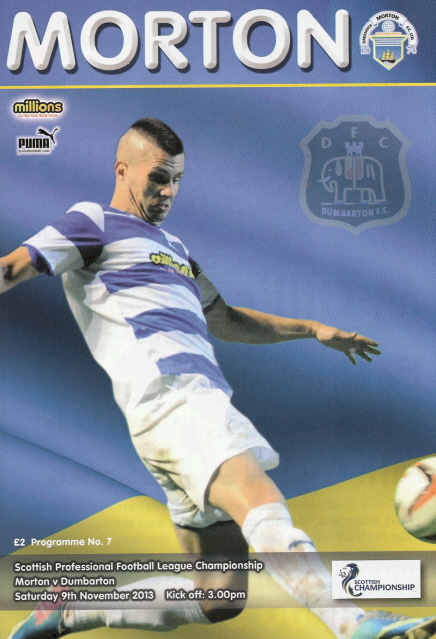 DUMBARTON slipped up on the road to bottom side Greenock Morton, going down 2-0 at Cappielow.

Goals from defenders Mark McLaughlin and Thomas Peciar gave the hosts only their second three points of the season.

Morton started the stronger of the two sides. Early pressure forced a corner, but Sons 'keeper Jamie Ewings palmed the ball clear of any danger.

The 'Ton won another set piece in a dangerous position soon after. This time a free kick 30 yards from goal. Dougie Imrie floated the ball in, over the Sons defence, to the unmarked McGlaughlin, but he was unable to direct the ball goalwards from six yards.

Then came a comedy moment. Paul McGinn and Imrie chased down a long ball that was going for a Sons goal kick. McGinn, doing his best to prevent Imrie from winning the ball, shoulder barged him into a massive puddle off the pitch, leaving the ex-Hamilton man soaking.

Dumbarton managed to contain the Morton pressure, and started to attack the home side on the counter. Chris Turner shrugged Farid Bachirou off the ball, before playing a curling pass out wide to Mark Gilhaney. Gilhaney cut the ball back for on-form striker Jordan Kirkpatrick, but he fired over from 18 yards.

McGinn and Gilhaney continued to pressure the right hand side with some dangerous crosses, but none of them could be converted.

The best chance of the game followed and it was for the home side. Nacho Novo was sent in one-on-one, and the Spaniard advanced before prodding the ball towards goal. However, his effort hit the post and went wide.

Kirkpatrick then had another chance for Dumbarton. This time his long-range effort was fumbled, but gathered at the second attempt by Morton 'keeper Derek Gaston to keep the score at 0-0. That is how it would remain until half time.

Sons started the second half brightly. A low, curling ball was floated into the area but there was no Dumbarton shirt to touch the ball home.

Novo had another chance for the home side. This time he turned Aaron Barry and shot across Ewings, but the keeper got down well to save and hold the ball.

On 60 minutes, Morton went 1-0 up. As had happened in the first half, an Imrie free kick was won by McGlauglin but this time he made no mistake, heading the ball past Ewings into the bottom corner.

Sons tried to change things soon after, with Bryan Prunty coming on for Kirkpatrick.

Dumbarton had certainly begun to apply more pressure by this time, and Mitch Megginson had a shot from the edge of the area well held by Gaston.

Novo had another chance for Morton, this time sliding in at the back post to get on the end of a cross. Thankfully for Sons his effort came off the post.

On 88 minutes, Morton made sure of the three points. Another set piece ended with Thomas Peciar getting on the end of it with Dumbarton 'keeper Jamie Ewings making a rare mistake to gift him the ball.

Other results mean Dumbarton stay seventh in the Championship, with another away game at Livingston next week.