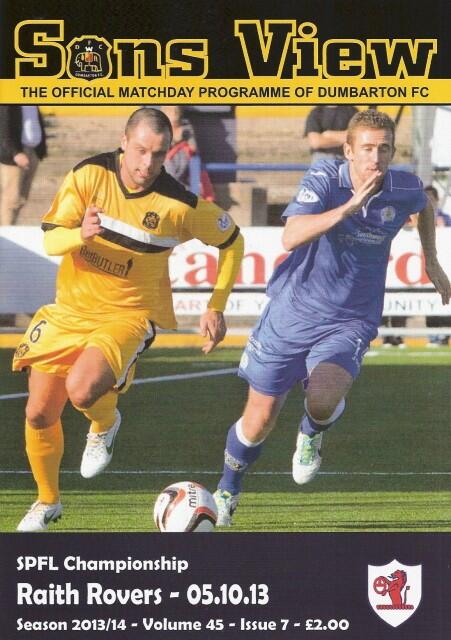 IN a topsy-turvy game at the Bet Butler Stadium, Dumbarton went 3-0 behind to industrious visitors Raith Rovers before grabbing two late goals themselves, and then conceding a fourth while searching for an equalizer.

“The game had plenty of drama,” commented Sons gaffer Ian Murray after the match. “There were goals, penalties and a red card. It was a disappointing result, obviously. Their goalie played well. We had our chances. We have another big game next week, so hopefully we can bounce back."

Dumbarton showed their vulnerability from the outset, with Rovers pressing hard and three corners rapidly being conceded by McGinn, Ewings and Graham within the first six minutes.

Nevertheless, it was Sons who had the first real chance. Mitch Megginson was played through. His first touch went awry, but he recovered well and cracked in a right-footed shot which went just too high.

A foul by Liam Fox on Mark Gilhaney on ten minutes gave the home side a free kick opportunity which went begging.

Then on 12 minutes Scott Agnew let fly with a left-footed shot from outside the box, which was well saved in a high and central position by Raith 'keeper David McGurn, who impressed throughout what would turn out to be a frustrating afternoon for Sons.

The visitors continued to break dangerously. Following some lax defending, Greig Spence threaded the ball to Calum Elliot. The Raith man slotted it home from six yards out to give his team a 1-0 lead after 17 minutes.

There was no let-up following the opener. Joe Cardle went down in the Dumbarton area on 20 minutes. Referee Brian Colvin had no hesitation in booking him for simulation.

Just before the half-hour the ball broke for Chris Turner 20 yards out. His left-footed strike went high and wide, however.

Another promising break involving Gilhaney broke down when the tricky winger was wrestled down by Kevin Moon – who was perhaps fortunate when he went unpunished.

Two minutes later Raith's Liam Fox sent in a thunderous strike from 25 yards, rattling Dumbarton's crossbar and also the nerves of the back line.

Sons had three further good efforts on goal before the break. Firstly a ball in from Gilhaney clipped the Raith bar.

Then Bryan Prunty struck the post in a crowded penalty area after the visitors' 'keeper had been left stranded.

In the second half, Turner and Garry Fleming got the game underway for Sons and Gilhaney had a chance on the right. He fired over the bar.

On 55 minutes Paul McGinn conceded a penalty. Spence stepped up and sent Jamie Ewings the wrong way to make it 2-0 to Raith Rovers.

In his first change of the afternoon, Dumbarton manager brought on big front man Colin Nish, replacing Scott Agnew, who had played well in spite of carrying a pain injection.

A minute later, Raith went 3-0 in front. A Cardle cross found Dougie Hill in the centre of the area. He nodded home. It looked all too easy.

Shortly afterwards there was a moment of drama when Gilhaney pushed in a right-footed shot that McGurn got a hand to but could not stop. The ball trickled onto the line before being cleared.

The home supporters were convinced that they had pulled a goal back, but the assistant referee was equally clear that the whole of the ball had not crossed the line. The score remained unchanged.

Gilhaney, at the centre of much of the action up front for Sons, fired wide again on 67 minutes. Cardle missed a similar chance from the right at the other end two minutes later.

On 71 minutes, striker Kevin Smith was brought on in place of forward midfielder Garry Fleming as Dumbarton decided to throw everything into getting back into the game.

For the next fifteen minutes Sons pushed but it looked as if a breakthrough was not going to be forthcoming.

Then, with two minutes to go before the end of normal time, Bryan Prunty, capitalizing on a weak back-pass, struck a right-footed shot from the centre of the box to the bottom right-hand corner of Raith's goal to make it 3-1.

The drama continued. In the first minute of time added on Reece Donaldson was dismissed for a foul in the box. He received a red card and Dumbarton were awarded a penalty.

Up stepped Prunty once more to send McGurn the wrong way and make it 3-2. Was a miracle going to happen?

Substitute Jordan Kirkpatrick, who had replaced Scott Linton, looked as if he might provide the third Sons goal, but his effort lacked power.

Dumbarton piled forward looking for an equalizer. Instead, Raith caught them on the break. Gordon Smith supplied the ball to Lewis Vaughan in the six-yard box. He fired home from the left to seal the match 4-2 for the visitors.

Aaron Barry, who had put in some important stops, was chosen as the Sonstrust Man of the Match for Dumbarton.