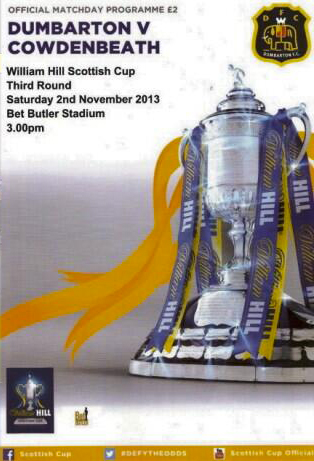 DUMBARTON and Cowdenbeath defied a heavy downpour before and during this match at the Bet Butler Stadium to produce an attacking Scottish Cup tie, with Sons progressing to the fourth round through a deserved to 2-1 win.

An inspired brace from young Sons striker Jordan Kirkpatrick gained victory for Dumbarton, despite a second half push back and goal from the visitors.

After the match gaffer Ian Murray proclaimed himself “delighted” with both the result and the performance in extremely difficult conditions.

The pitch was in good shape at the outset, despite heavy rains beforehand, but began to deteriorate as half time and the heavens opened again. By the end of the match it was becoming very difficult to play because of the surface water.

Both sides showed attacking intent from the kick-off on a cold and dismal afternoon. Sons started in 4-4-2 formation, while the Blue Brazil opted for 4-5-1.

Dumbarton secured the first chance, when Kirkpatrick curled the ball wide of the post after good link-up play from Mark Gilhaney in the centre and Mitch Megginson on the wing.

At the other end, Cowdenbeath's Greg Stewart and Jordan Morton were soon stretching the home defence.

A mix-up in the visitors' defence gave Kirkpatrick a chance to lob exposed Cowdenbeath 'keeper Thomas Flynn from 30 yards, but his effort lacked control.

However, on 19 minutes the youngster came good. Controlling a cross from Scott Linton, he turned and struck a shot that went off the upright and into the top corner of the net to give Dumbarton the lead.

Ian Murray had to make a substation for Sons far earlier than planned when Garry Fleming took a knock. He was replaced by popular front man Bryan Prunty.

Then Dumbarton striker Colin Nish forced a fine, diving save from Thomas Flynn, as he crept in behind the Cowden defence with a header from point-blank range.

Dumbarton stopper Jamie Ewings was called into action when Jamie Stevenson went on a run through midfield and unleashed a strong shot. Greg Stewart also came close for Cowdenbeath. Then Ewings blocked Hemmings on the edge of the six-yard box.

Kirkpatrick almost grabbed a second goal for Sons before the break, but his effort was well off target.

In the second half both sides struggled with the heavy rain. Dumbarton striker Megginson missed an easy chance created by Gilhaney, but was spared his blushes by an offside flag.

For Cowdenbeath, Jordan Morton menaced and Kane Hemmings sliced an angled shot over the bar.

Stevenson got the equalizer for Cowdenbeath on 58 minutes. Finding space 25 yards out, he tucked the ball wide of Ewings into the bottom corner of the net to make it 1-1.

Hugh Murray, back sooner than expected in a Sons shirt, was replaced by Scott Agnew, also returning ahead of the expected schedule, on 74 minutes.

Dumbarton could have reeled, but held their nerve. Indeed, they regained the lead just five minutes later.

Mitch Megginson found Kirkpatrick on the back post, and he volleyed home to make it 2-1 as the rain continued to lash down.

In the closing stages Nish produced another athletic stop from Cowdenbeath's Flynn, Megginson almost ricocheted a shot in off defender Thomas O'Brien, and Kirkpatrick hit the bar as Dumbarton threatened to add to their lead.

The two teams struggled towards the end, but Sons held on to claim victory in a second home game against Cowdenbeath in successive weeks.

Man of the Match Jordan Kirkpatrick also equaled his own previous professional scoring record of two goals in this one game, and twice came close to making it a hat trick.