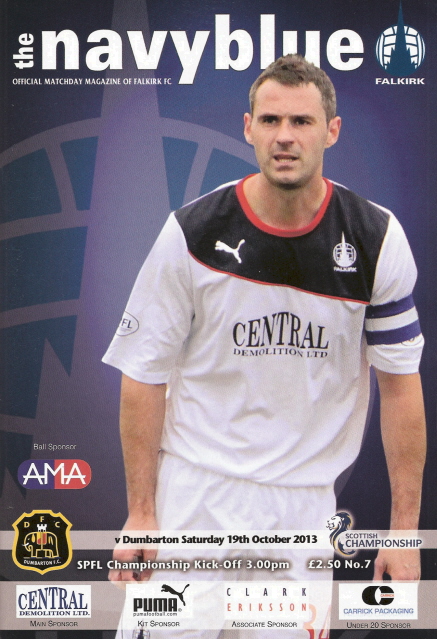 DUMBARTON survived a last-minute assault from Falkirk to secure a vital 2-1 win and three points on the road in this busy and absorbing match.

Prior to the match, players from both sides held up red cards and joined local youngsters waving flags from many nations in support of the Give Racism the Red Card campaign across Scotland.

Sons started with just four on the bench, following recent injury challenges, while the Bairns were looking to consolidate their position in the top half of the Scottish Championship table.

Falkirk kicked off towards the North Stand and had two early efforts on goal. First Rakish Bingham shot high.

On 7 minutes Dumbarton pounced to take a 1-0 lead. Jordan Kirkpatrick's shot looked as if it was heading safely towards Michael McGovern in the Bairns goal. Then Garry Fleming snapped in to fire it home to the delight of the visiting supporters.

At the other end, there was a glorious chance to increase the lead when Dumbarton's Mitch Megginson's cutback evaded everyone but Kirkpatrick, who fired over from the edge of the area.

The Bairns continued to press. McGrandles had an effort bravely blocked by Aaron Barry, who made several important stops.

Then Kieran Duffie made a run down the right and Phil Roberts was only inches away from connecting with the cross for Falkirk.

On 24 minutes Sons, who were looking enterprising on the break, made it 2-0. A great cross from Paul McGinn was pounced on by the hungry Megginson, who steered it into the net. A fine goal, and a great position for the away side to be in.

The Bairns continued to enjoy a good deal of possession and were looking dangerous. Sons remained well organized at the back and denied them shooting chances.

That was, until the 39th minute. At that point Phil Roberts was allowed to drift into space. He let fly with a screamer that gave Ewings no chance to pull the score back to 2-1. There was little any 'keeper could have done to stop such a shot.

As Falkirk came back, the referee, who had been allowing robust but fair tackles, had a word with Roberts over two challenges which appeared to push things a little too far.

Dumbarton held on to their lead despite a late first half surge from the home side, and went in to the break 2-1 in front.

Falkirk came out of the blocks flying after the break, unleashing wave after wave of attack and looking as if it was only a matter of time before they secured an equalizer.

In what turned out to be a tense and absorbing second period, Sons both pushed back and also rode their luck at times. They also maintained a huge level of discipline and concentration in the final third.

For the home side, Jonathan Flynn, who had apparently been struggling with injury, was replaced by Liam Dick.

Alston surged into the Dumbarton box at one point and fell dramatically when challenged. It looked as if the referee might give a penalty kick, but he was unmoved.

Falkirk had several strong chances to pull level. First, Alston forced his way into a crowded box once more before firing in a volley, which clattered off the crossbar with Ewings beaten.

Then Bingham almost connected with a looping cross from Roberts on the left as the pressure continued to build. Duffie squandered a third chance for the Bairns shortly afterwards.

On 76 minutes Ian Murray made his first switch for Dumbarton, taking off Garry Fleming and bringing on striker Kevin Smith.

Sons made good use of the break as they absorbed more pressure. The industrious Mitch Megginson had a chance to restore a two-goal lead, but his final effort was too weak.

Falkirk made two further changes before Sons' McKerracher came on for Megginson with just a minute left on the clock and the Dumbarton goal virtually under siege.

The visitors clung on to their lead and saw out the game to secure an impressive victory against a strong looking Bairns side.