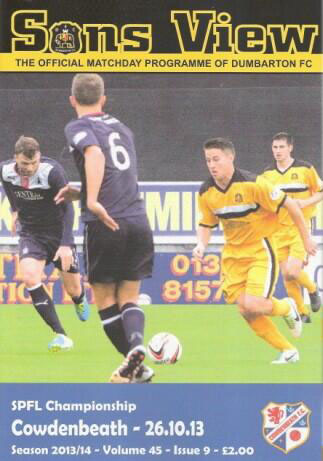 DUMBARTON shared the spoils with Cowdenbeath through a 0-0 draw at the Bet Butler Stadium, in a game that made up for in energy what it ended up lacking in goals.

Sons started the first half with pace, attitude and aggression, but as the tempo slowed down Cowdenbeath gradually came back into the game.

The visitors were fast out of the starting block after the restart. But Sons had their chances too, and overall dominated more of the play.

Commenting afterwards, Dumbarton gaffer Ian Murray said: “There was always a danger that after you dominate and you're not ahead, they could nick a goal on the break. We could have hoped for more, but we'll take a point.”

Mitch Megginson and Garry Fleming got Sons underway, shooting towards the away end. Sons were in a 4-4-2 formation and a diamond shape.

An early chance came when Mark Gilhaney put a ball in over the Cowdenbeath defence. It was aimed at Bryan Prunty, but he was just short of connecting with it.

This set the pattern for the first 20 minutes or so. Sons quickly began to boss the match in the middle of the park, looking for a way through in the final third.

The nearest Dumbarton came to scoring at this stage was from Jordan Kirkpatrick. Drifting on the right-hand side, he flicked the ball up 25 yards out and volleyed in a superb shot, which smashed against the crossbar with Thomas Flynn well beaten.

At the other end of the pitch, Cowden began to look dangerous on the breakaway. It took some solid defending from Aaron Barry to deny Hemmings, who with Stewart was beginning to create some real opportunities as the half hour mark arrived.

Probably the best chance of the game fell to Sons' Megginson. He beat the 'keeper to a long ball, edging it past him but, agonizingly, also just wide of the post.

Fleming and Gilhaney also got into the action, thwarted only by some good defending from the Blue Brazil.

Sons were allowing the early pace to drop, and as the half progressed this proved to be more to the advantage of their opponents.

At half-time Dumbarton had enjoyed more of the action, but concrete chances and the score remained level and goalless.

After the break, Cowdenbeath started to hit back and put the home side under some real pressure.

In what looked like a surefire opener, James Stevenson fired against the post. The ball ricocheted out and fell to Hemmings, who somehow managed to fire well over with the goal gaping. It was undoubtedly a let-off for Sons.

Then it was Dumbarton's turn to strike the woodwork. Megginson used his pace to beat a defender to the ball. He aimed for the near corner but hit the post rather than the back of the net. The score could so easily have been 1-1 at this point.

On 66 minutes Ian Murray made his first switch for Sons, bringing on Colin Nish for Garry Fleming.

By this stage the rain was coming down hard. It did not detract from the effort being shown on the pitch or the noise coming from both ends of the stand, but it did start to impair the quality of football on display.

Another adjustment for Sons came in the shape of Nicky Phinn arriving to replace Bryan Prunty with quarter of an hour left on the clock.

Both sides pushed for a winner, despite the worsening conditions. However, neither side could quite find the edge needed to steal all three points and ended up sharing the honours from an absorbing game.

The Sonstrust Man of the Match was doughty midfielder Chris Turner. The draw means Dumbarton remain in seventh place in the SPFL Championship.

Cowdenbeath are back at the Rock next Saturday, 2nd November 2013, for a third round William Hill Scottish Cup tie.