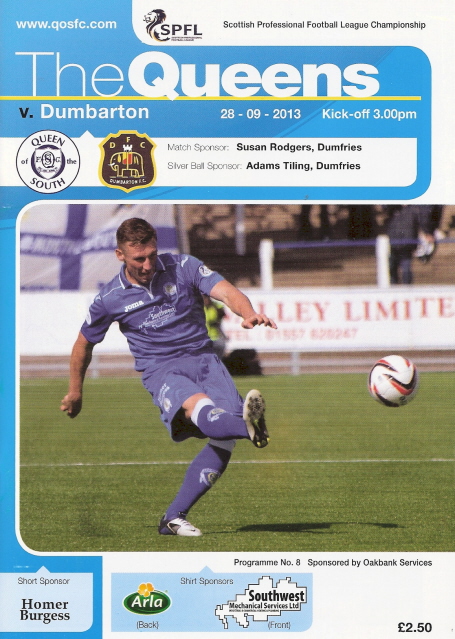 DUMBARTON claimed a well deserved three points against Queen of the South at Palmerston on a sunny afternoon, moving into sixth place in the SPFL Championship in the process.

The absorbing an entertaining game got off to a lively start, with both sides keen to grab the initiative as soon as possible.

Paul McGinn, who had an impressive match for Sons, secured an early half-chance with a shot from distance that ended up going well over the crossbar.

The Doonhamers pushed forward, but the visitors' defence proved resolute at clearing their lines. Both sides strung together a series of determined attacks, but no real chances emerged.

Then, on eight minutes, a ferocious challenge on Dumbarton's Hugh Murray from Queen of the South's Derek Young resulted in the Sons man having to go off for treatment to a bad ankle injury.

Garry Fleming came on for the injured Murray on nine minutes. Young went unpunished by referee Clancy for his foul.

The next opportunity fell to Colin Nish when he latched on to a cutback from Mitch Megginson. The big striker fired over the bar.

On 19 minutes Dumbarton went in front. Shortly after being upended by Chris Higgins, doughty Chris Turner lashed in a half volley from the edge of the box.

The ball flew into the bottom left-hand corner of the net, giving Calum Antell in Queens' goal no chance. It was 1-0 to Sons.

Up to this point the home side had enjoyed more possession. Now Dumbarton began to boss the game in the middle of the park and moving forward.

The lead lasted little more the seven minutes, however. Moving in from the right, Ryan McGuffie got in behind Sons' defence and crossed into the path of the onrushing Iain Russell.

The ex-Dumbarton man made no mistake, side-footing home past Jamie Ewings to level the match with 26 minutes on the clock.

The visitors pressed back, urged on by the vocal away support. McGinn had an effort aiming at the far corner of the goal tipped away by Antell. Then Turner clattered a shot into his own man, Colin Nish.

In the closing phase of the first half Queen of the South began to look particularly dangerous.

Russell could easily have put the home side ahead with a close-range header, but Aaron Barry did well to put him off.

The tricky Lyle worked himself into a decent position, striking the ball a yard wide of the post.

After the break, Mark Gilhaney turned and shot in the box following a long throw from Scott Linton, firing from a sharp angle. His effort was always rising and flew over the bar.

Queens now applied intense pressure and Sons rocked back on their heels for a good fifteen minutes. Andy Graham was proving solid in marshalling his troops, though.

Even so, the hosts seemed to be getting far too much time, and when Dumbarton cleared they were not managing to hold on to the ball for long enough to steady the game.

On the hour, Queens' manager Jim McIntyre made a double change in an effort to win the match. Stephen McKenna and Gavin Reilly were brought on in exchange for Young and Lyle.

On 63 minutes there was a significant let-off for Dumbarton. As the ball came through the middle, Barry miscued and allowed Iain Russell through. Jamie Ewings made a fine save to thwart him and the rebound was skewed well over.

At the other end, Scott Agnew saw his deflected shot go just wide for a corner, which was then cleared.

Dumbarton came close to regaining the lead after 65 minutes, when Chris Turner's promising shot was parried away by Antell.

For Queen of the South, goal scorer Russell was replaced by Dan Orsi as the match headed towards its final throes.

Dumbarton were well back in the game by now. An Agnew free kick created another chance in the box, but Barry could only head into 'keeper Antell's arms.

Scott Linton put a further threatening looking long throw into the area. There was a half-hearted penalty appeal when Prunty took a tumble.

Then, with three minutes of regular time to go, Garry Fleming slotted home the winning goal after a decent assist from Prunty.

In a last throw of the dice, and to wind the clock down, Sons' Jordan Kirkpatrick came on for the hard working Mitch Megginson.

The last six minutes, including three added on, were tense. But Dumbarton maintained their nerve, discipline and organisation to see out the match.

The valuable 2-1 victory proved to be Sons' first league win against Queens since 1992.

It was also the first time the two sides had met on league duty since 1997, when the Doonhamers played what turned out to be their last game at Boghead.

The afternoon's positive result and performance should prove a boost to Ian Murray's men as they face two consecutive home games over the coming fortnight.