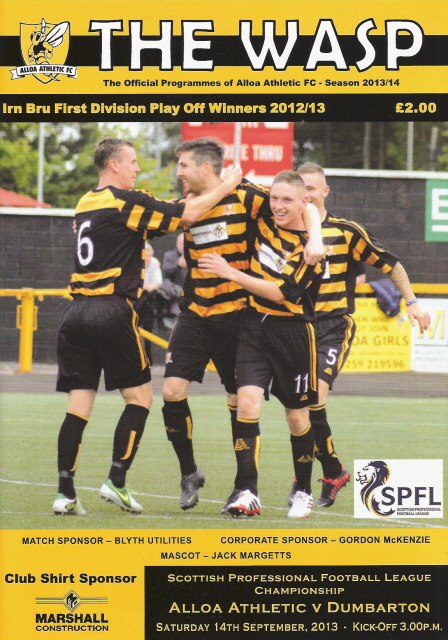 DUMBARTON claimed an important three points against Alloa Athletic, edging a competitive match at Recreation Park thanks to a Scott Agnew penalty midway through the second half.

"Everyone expects Alloa, Cowdenbeath and ourselves to be competing in a mini-league, and while we are aiming higher you do not want to fall behind," manager Ian Murray said before the game.

Adopting a solid 4-4-2 formation, Sons started brightly, dominating possession in the middle of the park for most of the opening twenty minutes.

Several attacks broke down around the area, as Alloa defended determinedly. The visitors forced two corners in rapid succession, but could not capitalise on them.

The first serious chance for Dumbarton came when an Agnew cross ball was won in the air by Mitch Megginson. His effort flew agonisingly wide of the post.

Spurred by the escape, the Wasps pressed back. A shot from striker Andrew Kirk floated dangerously over Sons 'keeper Jamie Ewings, ending up on the top of the net.

Both sides were keen to maintain pressure for a vital first goal. But although there were no clear-cut chances, the home side started to come back into the game.

Not long after the half hour, ex-Sons full-back James Creaney sustained a knock and was replaced by Jason Marr in Alloa gaffer Paul Hartley's first switch of the afternoon.

For Dumbarton, Scott Linton, who had already assisted a number of attacks, had a shot of his own tipped over the bar by Wasps goalie Scott Bain on 41 minutes.

It looked as if the opening period, which had featured some good moves but a lack of decisiveness in the final third, would end goalless.

Then, with the second minute of time-added registering on the clock, Dumbarton grabbed the advantage, seemingly out of nowhere.

The ever-busy Mark Gilhaney cracked a shot in. It struck Andy Graham. The big number 4 controlled the ball with a touch and fired home from close range to send Sons into the break 1-0 ahead.

In the second half Dumbarton immediately demonstrated that they were not going to sit on their lead, seeking to use the width of the pitch to stretch their opponents at the back.

Effective link-up play between Paul McGinn and Mark Gilhaney down the right-hand side culminated in a sweet cross which Bryan Prunty nodded just wide.

At the other end, Ewings made the first of several important saves for Sons, getting his fingers to a fierce strike to deflect the ball over the crossbar.

It proved to be a note of warning for Dumbarton. On 54 minutes Ryan McCord's corner was missed by the defence and found Stephen Simmons, who steadied himself and crashed the ball home to make it 1-1 and stun the travelling support.

Suddenly Alloa Athletic had wind in their sails and Sons' were back on their heels as several waves of pressure followed.

On 59 minutes Dumbarton boss Ian Murray decided to ring the changes. Off came Prunty, and on came new signing Colin Nish, whose size and presence began to make an immediate impact.

Two corners gave Sons the chance to test Bain once more, but his back line cleared them.

In a further adjustment for the visitors, Garry Fleming replaced Chris Turner on 64 minutes.

However, by this stage Alloa had regained the initiative and were starting to look increasingly threatening on the break.

It took another fantastic save from Jamie Ewings to push a cracking Wasps header wide, as Dumbarton's defence failed to clear their lines.

It looked as if the tables might be turning. Then Andy Graham was brought down by Alloa's Graeme Holmes in the area on 70 minutes. Referee Craig Charleston had no hesitation in pointing to the spot.

Up stepped Scott Agnew to make it 2-1 to Dumbarton with a well-struck penalty that went low, fast and wide of Wasps 'keeper Scott Bain.

Alloa immediately cranked up the pressure, pumping the ball up field and forcing Dumbarton into urgent defensive action.

Sons' final substitution came ten minutes after they had restored their lead. Young Jordan Kirkpatrick was brought on for Mitch Megginson.

The visitors had been given a fresh injection of energy and looked to hold on to possession and create further chances rather than to sit back.

At the end of one promising move Scott Agnew took a long-range drive, which flew over the bar.

Then Ewings produced a fine one-handed save, pushing a goal-bound Alloa shot around the post.

There were more nervous moments for Dumbarton before the final whistle blew, but they saw out the match to secure a first win on the road for the 2013/14 season.

The victory was well deserved in a busy, robust match. Sons had 55% of the possession and won 11 set plays in forward positions.

But there were only four shots on target for either side, indicating how tight the game had been.

The result puts Dumbarton into sixth position in the SPFL Championship, with seven points from the first five encounters.