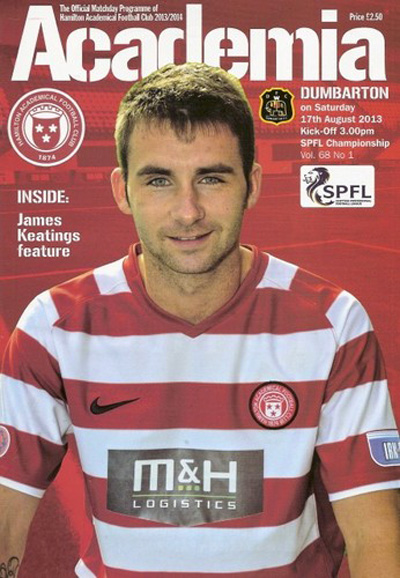 IT was a tough start to Dumbarton's away schedule for the 2013/14 Championship league season at New Douglas Park, with the home side running out convincing winners.

The match proved to be an entertaining one, and less confrontational than the eight bookings might suggest. However, it was definitely Hamilton Accies rather than the Sons who were smiling at the end of the afternoon.

Dumbarton started with a 4-4-1-1 formation, with the industrious Mark Gilhaney tucked in behind strikers Kevin Smith and Mitch Meginnson, and with Steven McDougall on the wing.

Sons had an early shout for a penalty after what looked like a foul on Scott Agnew. It might possibly have been given elsewhere on the field, but never in the area, and referee Kevin Clancy had no hesitation in waving the appeal away.

The first half-chance of the match fell Dumbarton's way when Gilhaney cut in from the left, but ended up firing wide of the far corner.

At the other end, a mis-timed tackle allowed ex-Son Jon McShane through. He was one-on-one with 'keeper Jamie Ewings, who saved well just before an offside decision was flagged.

Then there were chances in rapid succession for the Accies as first Grant Gillespie fired over the bar and then James Keatings hit the ball wide of the post from 15 yards and 20 yards respectively.

The best chance for Sons came when Gilhaney put Kevin Smith through. He only had Kevin Cuthbert to beat, but hesitated and allowed the home goalie just the moment he needed to parry away.

After early forward movement from Dumbarton, the game was starting to swing Hamilton's way.

Just before the half hour the referee adjudged that a follow-through from an Aaron Barry tackle, which caught Gillespie, was a penalty infringement.

James Keating made no mistake with the spot kick on 28 minutes and Hamilton Accies were 1-0 in front.

It went from bad to worse for Dumbarton a few minutes later as Keatings stroked home the ball for a second goal after solid build-up work and a well-timed pull back from McShane.

Then Darian MacKinnon cracked another fierce shot onto the crossbar as Sons reeled from the assault.

Dumbarton started to rally, but were unable to rally before half time, as manager Ian Murray exerted his ire on the referee and was spoken to for his protests.

After the break, the Sons gaffer made two immediate changes. Jordan Kirkpatrick and Garry Fleming came on to the pitch, replace Kevin Smith and Steven McDougall.

The visitors pressed, but it was clear that Accies were in no mood to cede their dominance of the game.

Dumbarton came near to their first of the match when Meginnson nodded an Agnew free kick across goal.

The ball trickled agonisingly along the line, but somehow the Hamilton back line managed scramble it clear, to gasps of frustration from the away support.

Shortly afterwards, Accies had the ball in the net again after a swift counter attack. But the offside flag had been raised before it went in. Another let-off.

On 62 minutes gaffer Murray decided to throw his team forward, bringing on popular striker Bryan Prunty for defender Scott Smith, who like Chris Turner had been struggling with a slight injury.

Five minutes later, Sons won a penalty for blatant shirt pulling in the area. Up stepped Scott Agnew to take the spot kick.

He aimed firmly to the right of 'keeper Cuthbert, who dived the wrong way as the ball sped home.

Sons' supporters cheered loudly and their team was back in the match at 2-1.

Suddenly the momentum was with Dumbarton. They surged forward, only to have another attack thwarted on the left.

Just as it looked as if there might be a comeback on the cards, the game swung dramatically back to Hamilton Accies.

Gillespie got on the end of a cross at the back post and had all the time in the world to take a touch and dispatch the ball home to make it 3-1.

Once again it was a defensive lapse that cost Sons dear, with Gillespie being allowed far too much time to do the damage.

As in the first half, one goal for Hamilton was followed by another in the space of just five minutes.

This time Tony Andreu picked up the ball up before advancing, finding a gap, and firing home firmly from the edge of the box.

At 4-1 to Accies the game was dead and buried. Jon McShane nearly added a fifth goal, but thankfully he shot just wide of the far corner.

Dumbarton had an opportunity to pull a goal back when Scott Agnew took a free kick outside the area and saw it curl just wide.

Then another effort from a further set play situation cracked against the post.

However, neither side had much wind left in their sails during the final few minutes of the match, and when the final whistle went Sons were left to rue missed opportunities and mistakes.