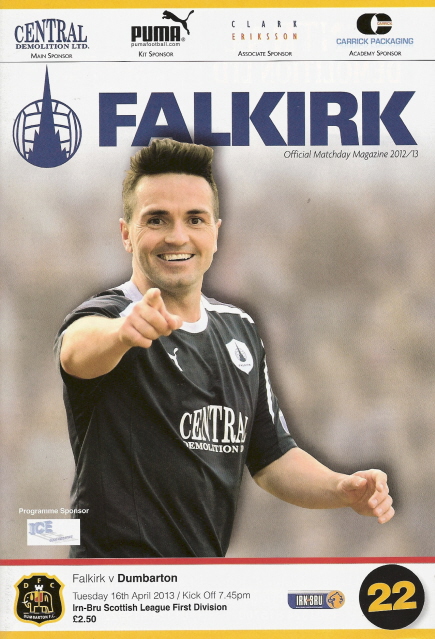 DUMBARTON took a major step towards securing their First Division place for next season in this match, claiming a deserved 3-1 victory over Falkirk in an end-to-end game.

Two goals in just over 20 minutes set Sons on their way. Falkirk pulled one back shortly after the half hour, but the visitors resisted pressure from the Bairns and added a third in the second half to secure vital points ahead of two big, upcoming games against relegation rivals.

At the end of the game, the Dumbarton players responded warmly to passionate backing from the travelling support.

Manager Ian Murray commented afterwards: “This win gives us a bit of breathing space, and three points this weekend gives us a massive chance of avoiding the playoffs. To do that with two games to go would be a terrific achievement.”

Strong winds had raised a question mark over the match, but it was given the go-ahead after a pitch inspection at 6.45pm. Conditions were initially a little blowy, but soon settled down.

Though Falkirk were missing a couple of players after their epic Scottish Cup semi-final against Hibernian at the weekend, any thought that they might roll over after that marathon were soon laid to rest.

The Bairns looked sharp in the early encounters, applying immediate pressure to Dumbarton's back line. But the Sons, who had enjoyed some breathing space after a lengthy two-games-a-week spell, were in a businesslike mood, too.

Mark Gilhaney had an opportunity to break for the visitors within the first few minutes, but was unable to keep the ball under control at the crucial moment.

Lyle Taylor was always going to be a threat for Falkirk, and he tested Dumbarton 'keeper Stephen Grindlay early on. Big Shay proved up to the challenge, not for the last time in what soon became a busy, entertaining match.

Sons' goalie was in action again moments later, as he dived to stop a Bairns free kick sneaking in to the corner of the net.

Falkirk started to play their characteristic game, passing the ball around and looking for a break. Dumbarton refused to be drawn too high, but challenged robustly when the ball came towards their final third.

At the other end, on one of a series of counter-raids, a Scott Agnew free kick was easily collected by Michael McGovern in the Falkirk goal.

On 19 minutes Sons set the agenda for the game with a first strike. Gilhaney reacted well to a loose ball, cut in decisively, and tucked it into the bottom corner to make it 1-0.

Shortly afterwards, it was 2-0. Garry Fleming was looking impressive tonight, consolidating his return to the Dumbarton first eleven with a solid performance.

He was rewarded on 21 minutes when a good, penetrating move from Sons ended with a double between him and Jim Lister. Fleming finished clinically from eight yards.

Falkirk pressed back and began to look dangerous once more. Sons were not just content to defend their lead, continuing to take the game to their opponents when they had the chance.

But it was the Bairns who struck next. Twelve minutes from the break, Sean Higgins twisted past Son's defensive flank. His cross was nodded home close to the line by Lyle Taylor to make it 2-1.

From Dumbarton's point of view it was a frustratingly easy goal to concede before half time, but they hung onto their important lead as the for the interval whistle blew.

The final minutes of the half were largely Falkirk's, with Grindlay clawing away a possible equaliser as a cross nearly swung right into the goal.

The beginning of the second 45 minutes was a cagey affair, with both teams seeming to realise that the next goal would be crucial.

Neither side wanted to sit back, but both were conscious of the importance of defending well, especially from the several set pieces that looked the most likely source of further damage.

There were chances at both ends. Chris Turner flicked on a Steven McDougall corner, only to see his effort go just over for Dumbarton.

For Falkirk, Taylor continued to menace, as the Bairns sought space for a killer ball through.

Then Gilhaney got onto the end of a swift movement forward with McGovern stranded in the Falkirk goal. He made a great connection with the ball, but his effort was cleared off the line, to deny Sons.

Back came the Bairns. Another chance fell to the ever-present and threatening Lyle Taylor, but he fired the ball wide.

Then suddenly, on 64 minutes, Dumbarton made it 3-1. Garry Fleming ran through onto a good Gilhaney delivery and drove the ball home with a sweetly angled drive past McGovern – to the obvious, noisy delight of Sons fans.

In the final 25 minutes of the game there were more chances at both ends, with Falkirk in particular missing out on opportunities to get back into the game.

First, though, McDougall almost added a fourth for Sons, as he clipped in a ball that was stopped by McGovern.

Dumbarton 'keeper Stephen Grindlay then proved his worth once more with a great save from Falkirk main man Taylor, who should have done better.

Ian Murray made his first substitution for Sons on 80 minutes, bringing on Bryan Prunty for Steven McDougall. Fleming was dropped off on to the wing, with Jim Lister and the added striker moving up front together.

Grindlay continued to make significant stops and saves for Dumbarton, as the visitors worked to see out the remaining ten minutes, seeking to keep possession and move the ball to the corner if no breakthrough looked on. They rode their luck at times, but had also earned it.

Dumbarton negotiated time added on safely, to claim a crucial three points from a game that ended a string of difficult matches.

The result gives them a great chance to steer to safety in the remaining fixtures of the 2012-13 season, two at home and one away.