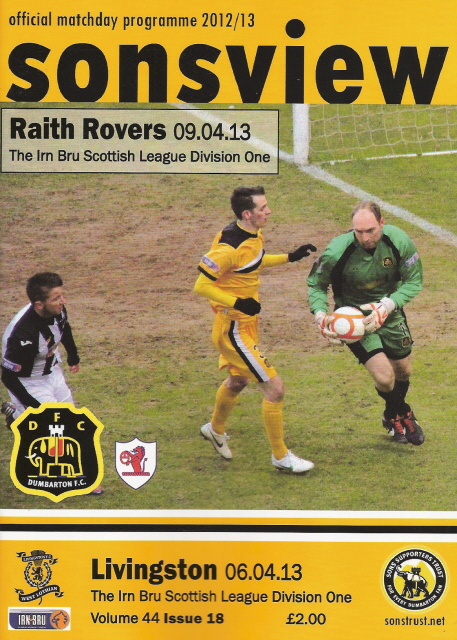 DUMBARTON eventually lost out to Raith Rovers at the Bet Butler Stadium this evening, having looked as if they had fought their way back into the game with 20 minutes to go.

After another bright opening spell, Sons went behind inside the quarter hour and took another 55 minutes to claim an equaliser, before conceding Rovers' winner a few minutes later.

“We started off okay, but then it was the same old story conceding the goal. It's hard to come back week after week. We did, but over the piece they faced us down,” commented manager Ian Murray afterwards.

As the game got underway, Sons began to look comfortable on the ball and produced a couple of chances.

After a Scott Agnew corner was flicked on, Bryan Prunty shot wide. Eventual Man of the Match Jim Lister also had one shot blocked and saw another drive from 18 yards out fly over the bar.

Mark Gilhaney was harrying the Raith defence when Dumbarton got the ball into the final third.

Alan Lithgow had a header from 12 yards on one raid, but it went straight to visiting 'keeper David McGurn.

Then suddenly, against the run of play, and on their first serious attack, Raith found themselves 1-0 ahead.

Stuart Anderson and Brian Graham were both involved in a sweeping cross-ball move that caught Sons' defence on the hop, with Greig Spence nodding home as Stephen Grindlay rushed out to try to close the gap.

Dumbarton pushed back, but seemed to lack decisiveness in advanced positions. A good cross from Agnew just failed to find a finish from Prunty or Lister.

Then Lister shot wide, and Agnew missed a really good short-range opportunity, driving the ball high over the bar.

Chris Turner hit another chance past the post, while at the other end Grindlay was called upon to make two good stops. At half-time Raith remained in the lead.

In the second half, Dumbarton missed an early opportunity to get straight back into the match when the ball broke to Agnew and he fired wide from 12 yards.

A penalty shout for Sons, when Simon Mensing challenged Jim Lister, was waved away by referee David Somers.

Mark Gilhaney cut in from the right and aimed for the far corner, but his effort was parried away by McGurn.

As in other recent games, Sons had quite a few dead ball chances from free kicks and corners, without ever coming particularly close. A further shot from Scott Agnew went well over.

'Keeper Stephen Grindlay was called into action several times as the half progressed, grabbing an inswinger, blocking shots from Grant Anderson and Joe Cardle, and making an impressive double-stop to keep Dumbarton in the hunt.

Alan Lithgow made an extraordinary toe-poke clearance at full stretch after Grindlay parried a shot and Andy Graham came in to cover.

On 70 minutes Sons got their equaliser. Jim Lister tormented the Raith defence. The ball fell to Mark Gilhaney just outside the area and he let fly with a fast rising shot, which gave the visiting goalie no chance.

Steven McDougall was brought on in place of Garry Fleming, who had just returned from injury.

At that point, Sons fans were hoping that the team could press an advantage, but it was not to be. Instead, Raith Rovers came back.

First, Grindlay was forced into another stop. Then, just five minutes after the match had gone to 1-1, Rovers took the lead again.

An attack down the right found Sons floundering, and a firm cross was equally firmly finished by Brian Graham.

Raith looked comfortably on top at 2-1.

On 81 minutes Sons gaffer Ian Murray brought Owen Ronald on for James Creaney, but the home side could not find another equaliser.

Joe Cardle cut in from the wing and fired a shot just wide of the far post for the visitors.

Sons' only further chance was from a corner deep into time added on which was knocked away.

In spite of this third consecutive defeat, Dumbarton have moved up a place to seventh in the SFL First Division, after Dunfermline Athletic were docked 15 points for going into administration.

With twelve points still to play for, bottom side Airdrie cannot catch Sons, who are also six points clear of the Pars and three points ahead of Cowdenbeath.