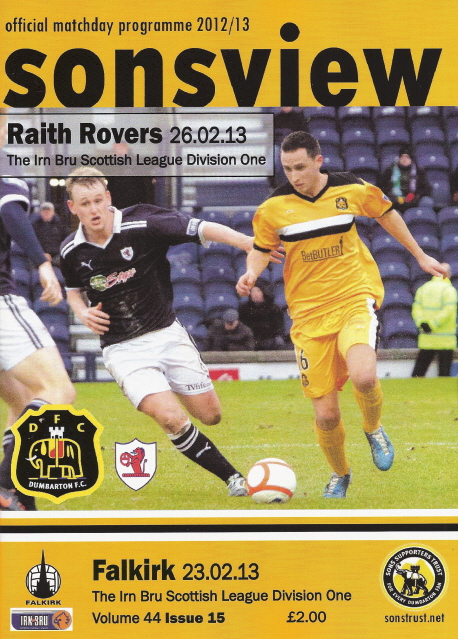 IT was a sunny but unhappy afternoon for Dumbarton at the Bet Butler Stadium, as Falkirk ran out comfortable 2-0 winners, thanks to two first half goals.

The Bairns enjoyed too much possession for significant chunks of the game, and it was only thanks to some fine goalkeeping from Stephen Grindlay that Sons did not go in at half time more than two down.

The dilemma for much of the match was that Dumbarton did not want to play too wide or open, in order not to risk being exposed by Falkirk's greater pace.

On the other hand, they were also coming off second best in the passing and retention stakes, and missed a couple of important opportunities which could have turned the game in a different direction.

Gaffer Ian Murray admitted afterwards that it had been a disappointing performance. “We have another two games at home, and it's important that we come back from this defeat and try to get some points,” he said.

Falkirk looked sharper in the final third from the outset. Lyle Taylor latched on to a long ball to put himself one-on-one with Grindlay. His first attempt was well blocked. The Sons keeper appeared to have the ball, but then Taylor dispossessed him, taking the ball wide, only for Stuart Urquhart to block his resulting shot – allowing Dumbarton to clear their lines.

Sons' first chance came when full back Paul McGinn, subsequently named Sontrust Man of the Match, clipped a ball in for big forward Bryan Prunty, who connected with it eight yards out, but fired wide.

For the next 15 minutes Dumbarton proceeded to be loose in possession. Falkirk, on the other hand, had more of the ball but were creating little.

Another opportunity came Sons' way when Scott Agnew shot from distance. But his effort went wide once more.

On 25 minutes the Bairns went 1-0 up. Blair Alston lifted the ball in for Thomas Grant, who volleyed home side foot from six yards. It was looking too easy for the visitors, who were well organised but hardly commanding.

Five minutes later it was 2-0. Taylor flicked the ball on to David Weatherston, who raced clear of the defence before firing under Stephen Grindlay. The Sons 'keeper just got a leg to the ball, but could not keep it out.

Not long afterwards the Dumbarton goalie made a remarkable instinctive save, diving low to palm away a header from Jonathan Flynn, which was definitely goal-bound.

Another chance for Falkirk came when Taylor used his pace and strength again to get away from Sons' Alan Lithgow, before moving in behind the defence and being denied by Grindlay once more.

A third important save came when the Dumbarton 'keeper diverted a further shot from the increasingly dangerous Taylor wide of the post.

The half ended 2-0 to Falkirk, but it could so easily have been more.

After the break Sons nearly created an early opening to get back into the match. A cross ball looked destined for Prunty, who was well placed to do some damage, but it took a deflection and ended up frustratingly just behind him.

Then Chris Turner drove a shot in from the edge of the area. It was on target, but lacked strength, and was comfortably saved by Michael McGovern in the Falkirk goal.

Playing with greater resourcefulness in the second half, Sons were having plenty of the ball in the final third, but they were trying too many passes and finding it difficult to penetrate a packed Bairns back line.

Mark McCusker came on for Alan Lithgow with 15 minutes of the game remaining, indicating that Dumbarton were going to do their utmost to get something from the match, building on a recent history of late revivals.

Unfortunately they were unable to grab the goal that could well have altered the flow and dynamic of the game at this late stage.

The last throw of the dice came when James Creaney replaced Stephen McDougall, trying to inject more urgency on the wing. Sons started to look both more urgent and sharper.

It was to no avail, however. This time Dumbarton were unable to force a late comeback, with Scott Agnew's speculative strike the closest they had come to reducing the two-goal deficit.