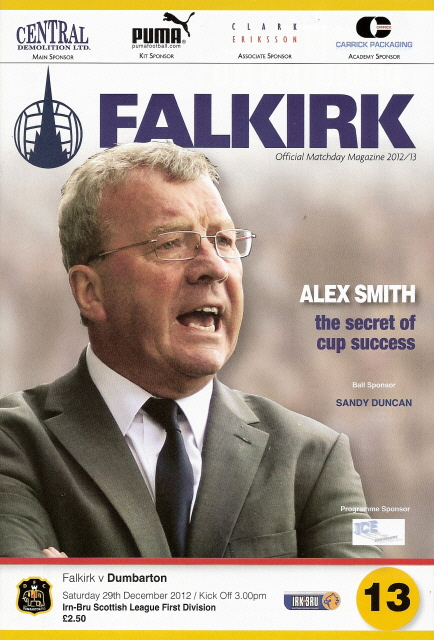 DUMBARTON picked up their second win in the Irn-Bru First Division this season, with an impressive 4-3 victory against Falkirk at the Falkirk Stadium.

A headed goal from Lyle Taylor gave the home side the lead late in the first half. But Sons frontman Jim Lister headed home in stoppage time to level proceedings at the break.

However, Dumbarton went 4-1 up in the second half, thanks to a double from Scott Agnew and another from Jim Lister. Two late goals from Lyle Taylor put the pressure on the away side in the closing stages, but Sons held out for the win.

Despite being appointed over a month ago, this match was manager Ian Murray's first league game in charge, and it started brightly.

Sons managed to force a couple of corners in the first few minutes, all of which passed without any danger.

Dumbarton looked dangerous down the left-hand side in the opening stages, with Stephen McDougall and James Creaney. McDougall did well to get past two Falkirk defenders, before laying a pass back for Creaney. His inviting ball curled towards Lister's head. However, Lister couldn't make enough contact to trouble the Falkirk 'keeper.

Despite the early pressure from the visitors, it was Falkirk who should have gone ahead. A loose pass back from Sons centre back Alan Lithgow, intended for 'keeper Jamie Ewings, was intercepted by Sean Higgins. He rounded the 'keeper, but took the ball too wide and fired just wide of the far post, letting Dumbarton off the hook.

The Bairns then had a penalty claim, as Taylor raced through. He made his way into the box, before being tackled. The home fans, players and bench alike appealed for a penalty, but referee George Salmond dismissed the claims.

Higgins then had another good chance for the home side. Blair Alston held the ball well on the left-hand side, before cutting in and sending Higgins in behind Sons' defence. He took a touch before sidefooting across Ewings in the Dumbarton goal, but the shot again went just wide of the far corner.

Then, on 42 minutes, Falkirk took the lead. Left-back Stephen Kingsley squeezed in between two Dumbarton players on the left hand side, before curling a ball in for Taylor to head home past the despairing Ewings, giving the home side a 1-0 lead.

It looked as if the half may finish on that scoreline, but Dumbarton were determined to go in level. A looping ball from Nicky Devlin was headed to the edge of the area by the Falkirk defence.

Dumbarton midfielder Chris Turner was first to the loose ball and fire in a half-volley which cannoned off the crossbar. The ball then found its way out to the left, and Stephen McDougall whipped in a cross for Jim Lister to head home from six yards and equalise for Sons.

Falkirk had a glorious chance to go in front right after the restart, as the ever present Higgins headed over the bar from six yards, unmarked.

Falkirk boss Steven Pressley then made a triple substitution in hope of shifting the game in his side's favour. Weatherston, Sibbald and Higgins were replaced by Jay Fulton, Lewis Small and Thomas Grant.

However, just a few minutes later, the match was turned on its head. Sons' Gary Fleming battled away against Bairns skipper Darren Dods, before getting round him, six yards out, and then being hauled down by Dods. Referee Salmond had no choice but to point to the spot and send off the Falkirk captain.

Scott Agnew stepped up confidently, converting the penalty and sending Falkirk 'keeper Michael McGovern the wrong way, to the jubilation of the travelling support.

Immediately afterwards, Dumbarton pressed the Falkirk back line yet again. Mark Gilhaney angled a low, driving shot across McGovern, but the Falkirk stopper got down well to save it.

Minutes later, Sons added another goal to their tally. It came from a flowing counter-attack, starting with the ball being cleared to target man Lister. He held the ball up, before back-heeling it to Gilhaney, who drove into the middle of the park, supplying Gary Fleming.

Fleming attracted two defenders towards him, 20 yards out, and then sensibly decided to lay the ball off to the onrushing Scott Agnew, who took a touch before placing it low, across McGovern, to double his account for the game and establish a two-goal margin between the teams.

Just minutes later, Dumbarton added a fourth goal. Great work on the right-hand side from Bryan Prunty, who had just replaced Gary Fleming two minutes earlier, took him to the byline. He clipped in a cross for Lister to power home a header -- to the delight, once more, of the away support.

The game was still far from over, however. The referee produced another red card, this time for Sons' left-back James Creaney, following a foul on Taylor during a Falkirk counter-attack. The sides were even again.

Dumbarton gaffer Ian Murray then replaced Stephen McDougall with Ross Forsyth in the hope of seeing the game out.

Falkirk claimed a goal back on the 85th minute, through the ever-dangerous Lyle Taylor. He latched on to a through ball from Blair Alston, and had no problems in dispatching it past the oncoming Ewings.

All the momentum was with Falkirk at this stage, and alarmingly they pulled another back three minutes later. It was Taylor who completed his hat-trick with a header. A corner from Grant created the opportunity, despite the best efforts from Sons defence to clear the line.

In the tense final stages of the game, Sons brought on Marc McCusker for his Dumbarton debut, replacing Jim Lister. He had little time to make an impact.

Falkirk forced two further corners in added time, with 'keeper McGovern even joining the action in the penalty area for one of them.

There was nearly a dramatic equaliser for the home side from one of these corners. McGovern rose to a win a header, the ball fell to Conor McGrandles, who volleyed it towards goal. But a heroic block from Lithgow ended the danger, and the ball was bundled out for a goal kick.

By the time the referee blew the full time whistle, Dumbarton had managed to hold on for only their second league win this season. They remain at the foot of the Irn-Bru First Division, five points behind Airdrie United, but with three games in hand.