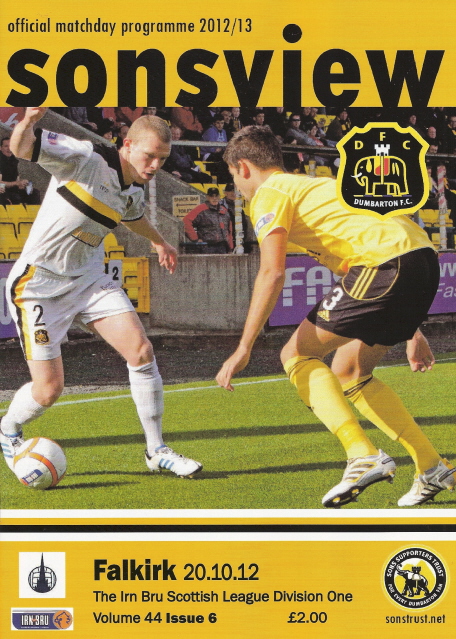 DUMBARTON suffered a dispiriting home defeat against Falkirk, going down 2-0 at the Bet Butler Stadium after a grim opening period and a partial recovery after the break.

It took both sides some time to get a grip on the game in a generally listless and error strewn first half.

On 6 minutes Sons had an early chance when Scott Agnew, just outside the area, took a shot that went wide of the post on the left.

At the other end, the Bairns' David Weatherston dug out a shot that flew over Dumbarton's crossbar.

Shortly afterwards, on 16 minutes, Lyle Taylor opened the scoring with a goal for Falkirk. He pounced on a loose ball from a defensive mix up, driving from the edge of the penalty area into the bottom left-hand corner of the net, leaving 'keeper Jamie Ewings no chance.

Dumbarton pushed back, but there still seemed a lack of urgency in their play. The home side was also failing to capitalise on set-play situations, such as a free kick picked up for a foul on Mark Lamont.

On 22 minutes, Falkirk's Stephen Kingsley sustained a knock and left the field to be replaced by Chris Smith.

But things got worse for Dumbarton just after the half hour. David Weatherston made it two for the Bairns from a fast break, when Dumbarton lost the ball in the opponents' area. The assist came from Jonathan Flynn.

It was another situation in which Sons found themselves behind after a slip up and a four-on-two counter attack.

Falkirk looked comfortable going into the break, though in truth neither side was playing with conviction.

The pace increased in the second half and Sons applied far more pressure. Not long after the restart, Alan Lithgow took a shot following an in-swinging corner by Mark Lamont from the left by-line.

Stewart Murdoch got the block in for the visitors, and then Chris Smith made an important clearance from a left-footed corner by Scott Agnew.

A further free kick and shot from Agnew almost brought Sons back into the game, but the Bairns were saved first by Michael McGovern and then by Ryan McGeever.
Dumbarton boss Alan Adamson, in charge for what turned out to be the last time, decided to ring the changes on the hour, bringing on Mark Gilhaney for Phil Johnston.

The tricky winger got straight into the action, harrying the Falkirk defence and trying to open up space for the Sons strike force.

The game drifted back and forth, with the home side claiming more possession, but struggling to do anything decisive with it.

On 76 minutes Bryan Prunty came on in place of Martin McNiff, as Sons threw themselves forward in search of a goal, occasionally exposing gaps in the middle of the defence.

As the game began to peter out, Dumbarton had two good final efforts. First, on 78 minutes, a foul by Falkirk's Smith on Garry Fleming resulted in a yellow card and a direct free kick. Chris Turner's shot was fast and hard, skimming off the cross bar.

Then with five minutes of the game left, Jim Lister produced a blistering strike from 18 yards.

But it was not enough and Sons went down to their seventh defeat at the end of the first quarter of the season, in front of a crowd of 1,041 at the Bet Butler Stadium.