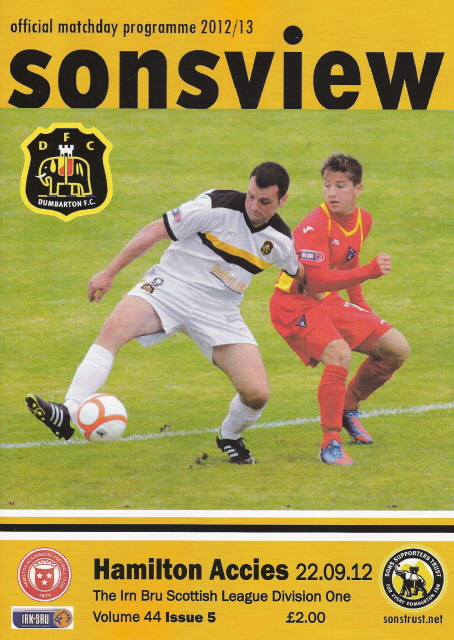 IT was a case of 'so near, but so far' for Dumbarton against Hamilton Accies, as two goals from the visitors right at the end of the game thwarted what had looked like a certain Sons victory at the Rock.

The opening period was an even affair. A revamped Sons side had the best early chance, as forward Bryan Prunty saw an early shot, assisted by Jim Lister, pushed aside by Accies 'keeper Kevin Cuthbert.

A half volley from Phil Johnston and a dangerous looking cross by Nicky Devlin were also blocked, with Hamilton's Ziggy Gordon then being denied by Stephen Grindlay in the Dumbarton goal.

On 21 minutes Alister Crawford opened the scoring for Accies with a soft goal, picking up on a half clearance and driving the ball low and hard under the body of a diving Grindlay.

Two minutes later James Creaney was booked for a robust challenge on Louis Longridge. For a moment it looked as if things might be worse, as referee John McKendrick momentarily held a red card in his hand, but opted for yellow.

Another early goal conceded was a dispiriting blow for the home side, but Sons fought back. Alan Lithgow and Mark Lamont had efforts saved and blocked respectively. Martin McNiff was working hard to set up opportunities.

Then a cleverly engineered cross from Lamont, knocked on by Prunty, caught Lee Kilday off balance. He turned the ball into his own net on 32 minutes to level the score at 1-1 and cause an eruption of joy from the home fans.

Sons continued to press. A punt from outside the box by industrious Garry Fleming went well over the bar. Another shot from Bryan Prunty was saved by Cuthbert.

At half time honours were even, but with the momentum moving in Dumbarton's direction.

Hamilton had threatened on a number of occasions, but Sons' back line held, with Ross Forsyth and Alan Lithgow bossing proceedings against attacks from the middle of the park.

Martin McNiff's long throws were causing the visitors problems in the final third, but too many dead ball situations – both corners and free kicks – had been squandered in the first 45 mins.

After the break, Dumbarton went straight back onto the attack, with an assist from Forsyth setting up McNiff, whose shot forced an impressive one-handed save from Cuthbert.

For Accies, an effort from Longridge on 50 mins went harmlessly over the Dumbarton crossbar and Grindlay made two significant stops from Ali Crawford.

As the hour approached the game became bogged down in a series of petty infringements on both sides, with the two struggling teams seeking to assert decisive dominance on the game.

On 68 minutes Hamilton made what turned out to be a vital substitution, with James Keatings coming on for Fisher.

Sons' hard work was rewarded on 72 minutes. James Creaney put Mark Lamont through. His high quality cross left the Hamilton defence standing, and Jim Lister ran in to head the ball into the net from close range. 2-1 to Dumbarton.

Four minutes later Lamont teamed up with Bryan Prunty in a similar move. This time the big forward scored with his foot at the near post, giving the home side a hopeful 3-1 lead on 78 minutes.

Not long afterwards, Sons almost made it 4-1. As Agnew delivered, Bryan Prunty had an excellent chance right inside the penalty area, but he put the ball to the right of the target.

For Accies, Jon Routledge makes a clearance from Mark Lamont shortly before Ryan Metcalfe came on for Bryan Prunty, who was given a huge ovation by Sons fans as he left the field.

Then on 88 minutes Hamilton substitute Keatings guaranteed a tense finish to the match by pulling a goal back for the visitors to make the score 3-2. The assist came from Steve May, but it was a ball that should have been cleared by Sons' defence.

The cost of the mistake proved very high indeed, with what seemed like a sure three points evaporating as Dumbarton failed to close the deal. They held out until time added on.

However, Sons' hearts were finally broken in the fifth and final full minute of extra time. The referee waved away strong claims of an infringement on Dumbarton 'keeper Stephen Grindlay, and as the ball fell to the ground James Keatings crashed it into the net to claim a brace and level the game at 3-3 with only seconds to go before the final whistle blew.

It was a bitter blow to take. On the positive side Sons are now up and running with three more goals and a point in their First Division campaign.