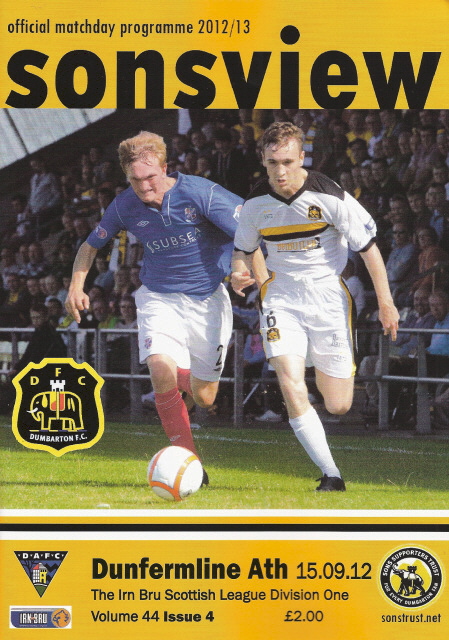 ANOTHER gutsy performance by Dumbarton has gone unrewarded at the beginning of what is proving a difficult First Division campaign, with ex-SPL Dunfermline Athletic claimed a 2-0 victory at the Rock.

Sons boss Alan Adamson commented afterwards: “We are just falling a wee bit short at the moment. At this level you have got to take chances when you get them.”

Both sides showed early purpose in a hard fought match. Josh Falkingham, who ended up setting up both Pars goals, tormented Sons' defence from the outset.

However, it was the home side that maintained a decent chunk of possession in the opening period, though Dumbarton struggled to find their way past an organised and decisive Dunfermline defence or to assert themselves up front.

Sons almost took the lead when Alan Lithgow's powerful header clattered against the corner of the upright. Other near chances were created by Mark Gilhaney, Jim Lister and Bryan Prunty.

A free kick from Scott Agnew also caused all kinds of problems and a goalmouth scramble. The visitors forced the ball out and the danger was averted.

Sons' Steven McDougall tested Paul Gallacher in the Pars goal midway through the half. His powerful 25-yard drive that was well held by the 'keeper.

In the end it was the Pars who went into the break 1-0 up. A slip allowed Josh Falkingham to put in a lethal cross, straightforwardly converted at close range on 41 minutes by former Hearts midfielder Andy Kirk, who had signed for the pars over the summer.

Shortly afterwards a fine instinct save by Stephen Grindlay from Ryan Wallace, the first of several important stops throughout the game, spared Sons further blushes.

Dumbarton came out fighting again in the second half. But Dunfermline looked more measured on the ball and began to control the pace of play on a sticky surface which they had struggled to adapt to.

Big Shay made his imposing presence felt again not long after the restart, with an accomplished fingertip stop to deny former Sons team mate Andy Geggan.

Then on 52 minutes Dumbarton went two goals behind as Stephen Husband wriggled through the defence to drive the ball home, after first being denied by the home 'keeper's outstretched leg. It was an opportunity that he should probably not have had.

The second goal proved a blow from which Sons never really recovered, though they continued to push forward with purpose when the opportunity arose and to defend solidly against skilful opponents.

What might have been an expected goal rush from the Pars after the second half breakthrough never came, with Lithgow and Martin McNiff making crucial tackles at the back. Even so, Dunfermline dominated possession throughout the half.

At the other end, Garry Fleming and Jim Lister saw goal efforts fly just over the bar for Dumbarton.

Substitute Mark Lamont, who had replaced Scott Agnew on 67 minutes, also came close to replying for Sons in the final minutes.

For Dunfermline, ex-Son Craig Dargo, who had played a role in Sons' promotion push at the end of the 2001/12 season, replaced Whittle.

Dumbarton gaffer Alan Adamson tried a final gambit with three minutes remaining, bringing on Ross Forsyth and Ian Johnston for James Creaney and Mark Gilhaney. By this time the die had been well and truly cast, however.

In the end Dunfermline proved too strong, in spite of a spirited display from the home side and some frustratingly near chances in both halves of a competitive, entertaining game.

The match also saw the largest home crowd of the season so far for Dumbarton, with 1.021 recorded as being in attendance.