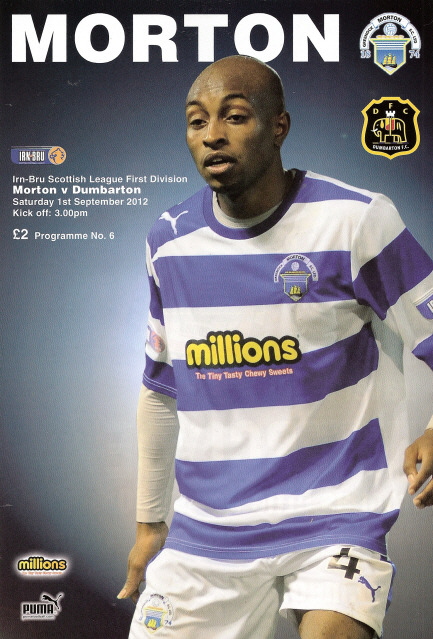 Sons were competitive in the first half, and perhaps a little unlucky to go into the break 1-0 down – although the home side had hit the post twice by then.

It was the second half that sunk Dumbarton, however. In particular, they never recovered fully from a hotly contested penalty decision.

After the game, playmaker Scott Agnew tweeted: “Great support from the Dumbarton fans today. It's going to be hard but together we can turn this around.”

Sons created a good deal of early pressure in the game, forcing corners and pushing the ball up well from the back. The 'Ton looked sharp on the break.

Gilhaney and Lister created two good chances. First the winger got in behind the defence and tried to lay the ball off to striker Jim Lister. But he did not quite connect.

Then Lister won a flick on as the Dumbarton frontline pressed hard. His shot went just wide of the post.

Morton hit the post when a cut-in from the left went across goalie Stephen Grindlay before hitting the post and being cleared for a corner. Michael Tidser's 25-yard shot cannoned back off the woodwork.

On 43 minutes the home side took the lead. Archie Campbell stole a march on the defence, and his left-foot shot flew into the bottom right-hand corner of the net, giving Sons' sticksman Grindlay no chance.

The body blow seemed to make it difficult for Dumbarton to get out of the blocks aggressively after the break.

The turning point of the match came when, in the first of a series of controversial decisions, referee Bobby Madden adjudged that Sons' Alan Lithgow had fouled Morton's David O'Brien in the area.

The visitors protested loudly that the ball had visibly been played first, but to no avail. From the spot-kick Archie Campbell struck the ball into the net to give himself a brace and Greenock Morton a two-goal lead.

From that point onwards, nine minutes into the second half, the 'Ton piled the pressure on and Dumbarton seemed to lose heart.

Lithgow, Agnew and McDougall had chances to pull Sons back into the game, but most of the initiative was coming at the other end.

Morton finally sealed the points when Campbell found the bottom right-hand corner from 12 yards after 76 minutes, claiming his hat-trick and making it 3-0 to the home side.

The striker missed the chance of a fourth goal in the 89th minute, when what Sons considered a soft penalty decision against Martin McNiff led to a further spot-kick that thundered off the crossbar.

Campbell touched the ball first after the penalty as Morton almost turned it in, but the referee allowed play on in spite of the infringement.

All in all it proved to be a dismal afternoon for Dumbarton at Cappielow, with Morton gaining a vital three points and Dumbarton going down to a fourth successive league defeat.