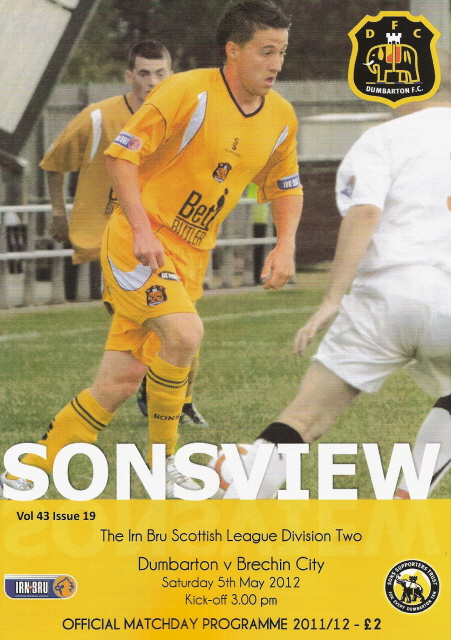 A FINE display by a youthful Dumbarton team saw off a strong Brechin City side at the Rock on the last official Saturday of the season, with Sons claiming a deserved 4-2 victory.

Both teams enjoyed a good number of chances, but the difference in the end was that Dumbarton took more of theirs and also enjoyed some significant spells of dominance – especially in the second half, when all six goals were scored.

The main story of the game was Craig Dargo's hat-trick, which he later dedicated to his 4-year-old son Kyle. It was the striker's first triple since January 1998, when he scored three in a 4-1 Raith Rovers win over St Mirren.

This afternoon's match took a little while to warm up, but when it did Sons began to gain more of the possession. However, the first real chance went to the visitors. Charlie King's corner found the head of Craig Molloy. However he failed to direct the ball accurately.

Eleven minutes in Dumbarton's Arlan Kadima Mpata, who had started to cause the Hedgemen some problems at the back, put in the first of several acute crosses, finding Dargo, who shot from his back foot and just over.

At the other end, fellow Frenchman Arnaud Gastal was proving his value in goal with a series of important stops and some good distribution. Both James Lister and Rory McKenzie went close for Brechin City.

For Sons, Kevin Nicoll made a series of penetrating runs, and Tony Wallace had a punt which went straight into the arms of City 'keeper David Scott.

King also had a couple of further efforts for Brechin, one flying well over and the other being saved by Gastal. This, incidentally, was the first time that Dumbarton had fielded two sons of France in a first-team game.

Sons were now enjoying overall control of the game from midfield and on the wings, but were not quite translating this into decisive chances.

Meanwhile, Gary McKell rescued the home side with a fine tackle to stop David McKenna, after the Brechin no. 11 had been released in a dangerous position from a corner.

Gastal's stretching, flying, one-handed save from McKenzie was particularly commendable. Martin McNiff replaced Ryan Finnie just before half time, after the latter suffered signs of a recurrence of his injury.

Following the break, Brechin City came out flying, looking to break the deadlock. Molloy and King combined in a headlong raid, but King's free kick from an infringement on the edge of the area went well over the crossbar.

Scott Buist had a shot blocked effectively by Gastal, as Brechin City pressurised the Sons with wave after wave of attack.

They took the lead eight minutes after the restart, when Charlie King hit a masterful volley inside the area from McKenna's cross, placing the ball to the left and well beyond the reach of the Sons goalie.

Wallace, Dargo and Nicoll worked a number of responsive attacks for Sons. Then on 62 minutes Craig Dargo picked up on a move propelled by David Gray, whose quiet first-half was giving way to a storming performance in the second forty-five, and finally by Tony Wallace.

The Dumbarton no. 9 struck the ball superbly, giving David Scott no chance and levelling the score at 1-1.

On 66 minutes Glenn Thomson replaced McKell to make his debut for the Sons. For Brechin, former Dumbarton favourite Derek Carcary came on for King, but failed to make any real impact on the game.

Four minutes later, Dumbarton were 2-1 up. A fantastic move down the left wing saw the industrious Pat Walker send Gray through. From a tight angle, and in spite of a strong challenge, he put in a superb cross. Dargo came rushing in to head the ball home powerfully for his, and Sons', second of the afternoon.

McNiff came close again a few minutes later, after a good assist from Wallace. Then Dargo completed his hat-trick and put Dumbarton 3-1 up on 72 minutes, once more set up by Gray, who also had a couple of chances himself – but snatched at the first and missed the second.

At 3-1 Sons looked safe, but then they let Brechin back into the game. Craig Molloy did the damage, firing in to pull the score back to the 3-2 a couple of minutes before the end of the match.

There was a further twist deep into stoppage time, however. Gray once more created a chance for Dumbarton, and Thomson was on hand to finish the game off at 4-2, striking the ball home through a packed area.

It was a pleasing conclusion to a highly satisfactory performance by a youthful and experimental Sons line-up.

The men from the Rock took a standing ovation from fans in the stand, and now prepare themselves for the home leg of their First Division playoff semi-final against Arbroath on Wednesday 9th May.