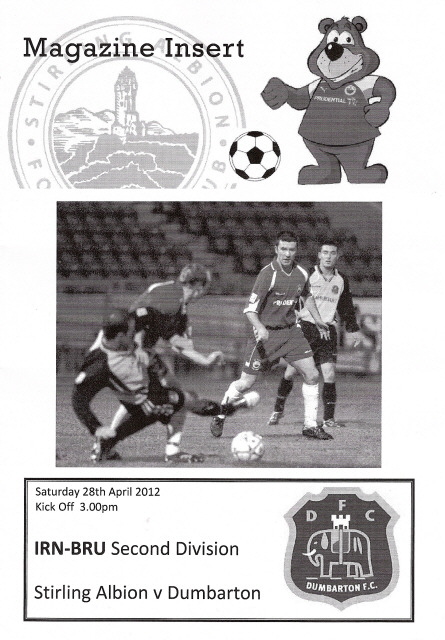 DUMBARTON needed three points to guarantee a place in the promotion play-offs at the end of a tough 2011/12 campaign. They achieved it away against Stirling Albion, but only after a second half fright and a last minute goal.

The sunshine and the jubilant mood of the visiting Sons supporters was not always matched by the quality of the display on the pitch.

This game mattered to both sides. The Binos were hoping against hope that they might still gain the points they needed to escape the relegation hatch, though that was all but a mathematical certainty. Sons, on the other hand, had higher things on their minds.

That perhaps explained why one side looked as if they had run out of steam, while the other appeared to be struggling to achieve momentum after a massive display against Airdrie United the previous Saturday.

Popular striker Pat Walker was in the starting line up once more. He was also all over the terracing, as fans donned his visage on photographic facemasks, giving their chant, “There's only one Pat Walker” an ironic twist.

On the pitch, meanwhile, Sons soon looked in control of the game, with Walker, Mark Gilhaney and Bryan Prunty working hard up front and little direct threat at the other end early on.

However, during a patchy first half, Dumbarton once again struggled to turn possession and advantage into realised goal-scoring opportunities.

Walker, busy as ever, fired just over the bar from a sharp angle after being one-on-one with the Stirling 'keeper.

Ally Graham and Scott Agnew also had chances for Sons, while Albion pushed back after waves of Dumbarton attacks, requiring goalie Stephen Grindlay to make a couple of collects and stops, and pulling good tackles out of Martin McNiff and Alan Lithgow.

The hosts' first opportunity fell to Graham Weir, who failed to find a way past Grindlay with a tame effort.

Gilhaney also fired in for Sons, and Kevin Nicoll had a missed attempt at an overhead kick, and not long after Prunty had a successful one but could not get the ball in the net.

Stirling Albion nearly caught out the Dumbarton defence on a couple of occasions, but rather more of the traffic headed in the opposite direction. A powerful Lithgow effort was tipped over by Callum Reidford, while an Agnew drive was blocked by a Binos' central defender.

After the interval the game continued to look rather scrappy. Prunty had a half chance, but could not adjust his balance in a tricky situation after Agnew had again tested the away 'keeper, who parried his effort away.

On 56 minutes Tony Wallace was brought on to replace Nicoll for Sons. But he had little opportunity to make a fresh impact before disaster struck. A breakaway strike from Scott Davidson temporarily silenced the colourful, noisy away support, putting Albion 1-0 in front eleven minutes after the restart.

Sons reply came when Stirling defender Devon Jacobs and keeper Callum Reidford guided a ball from Bryan Prunty into his own net to make it 1-1.

The stroke of luck was just what the visitors needed. The tempo of the game increased significantly.

The game moved from end-to-end, and Dumbarton survived one strong penalty appeal, while looking the more determined and threatening in the closing stages.

Craig Dargo, replacing Pat Walker on the hour, rose to head in a Scott Agnew corner and give Dumbarton a 2-1 win on 92 minutes. Shortly afterwards the final whistle blew to tumultuous applause from Sons fans.

Dumbarton face Brechin City at the Rock next Saturday, in the last official home fixture of the season. But all thoughts will now be turning to the play-offs and one last, mighty promotion push.