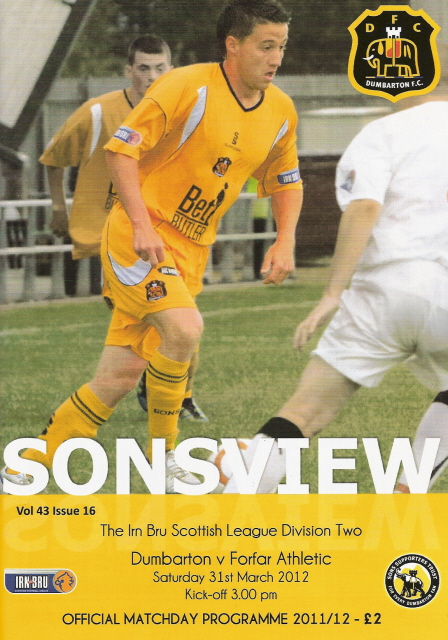 AN own-goal from Forfar Athletic goalkeeper Greg Paterson, turning in Scott Agnew's angled corner, was enough to give Dumbarton a crucial win at the Rock – one that keeps Sons in promotion play-off contention.

The victory was a welcome relief after a series of dispiriting defeats, and came on the back of some good football from Sons in both halves. However, the home side also rode their luck at the back. What ended up a 1-0 win for Dumbarton could easily have seen both sides netting several more.

Sons started in lively style, as they have done in a number of recent games. But following what seems like a well-worn pattern, they missed chances and sometimes struggled to turn creative football into finishable scoring opportunities.

Frenchman Arlan Kadima Mptata, playing his first game for Dumbarton since his international clearance came through, helped engineer an early break, when he was released on the left and set up Agnew, whose left-footed shot swung wide of the far post.

A couple of longer-range efforts, one from Bryan Prunty, went over the bar, and an Agnew free kick was turned away by Paterson, as Sons clearly dominated the opening spell.

It was 17 minutes before the Loons had their first serious attempt on Stephen Grindlay's goal, but Dale Hilson's shot was skewed past the outside of the upright after he turned to shoot. Kevin Motion put another effort straight to the Sons 'keeper.

Craig Dargo made a couple of darting runs and sent through dangerous looking passes for Dumbarton, with Mark Gilhaney among the near beneficiaries of these forward pushes. But somehow Forfar players kept blocking the final ball or the goal scoring opportunity. Mptata also side-footed just wide.

At the other end, a free kick on the right produced a bit of a goalmouth scramble, with Sons just managing to clear their lines.

After one great Dargo touch, Gilhaney lost the ball, then regained it and played a one-two. Paterson was off his line to smother the chance, however.

In the second half Forfar Athletic had the first clear-cut opportunity. A free kick from a central position just outside the area curled into the box and was within inches of finding a striker's foot in a position which would have left Grindlay with little hope of saving.

The action soon moved up the other end, though. Prunty sliced a good shot in off Dargo's pass, but it narrowly missed the target. A return ball might have created slightly more space. Minutes later Agnew latched on to the ball and fired over from 22 yards.

On 56 minutes, Dumbarton were in front. Scott Agnew curled in a trademark inswinging corner. Paterson tried to palm it away but succeeded only in directing the ball into the top-hand corner of his own net. 1-0 to Sons.

The home side looked buoyed by the turn of fortune, but Forfar did not waste much time in coming back at them.

A quality move in Dumbarton's area created a shooting opportunity on the far side of the box. It was struck with power, but a foot over the top.

As the half progressed Forfar, desperate to get back into the match and to try to lift themselves away from the foot of the division, kept catching Sons' defence for pace in the final third. They were also a fraction quicker in reaching loose balls.

Both Alan Lithgow and, in particular, Dominic Kennedy at No. 5, helped to stabilise things at critical moments, while Kevin Nicoll – impressive during Sons' ten-game unbeaten run – struggled somewhat.

In spite of some defensive let offs, Dumbarton came agonisingly close to claiming a second goal when a superb strike from Scott Agnew ricocheted off the inside of Paterson's right post, flew across the face of goal, and just missed going in on the other side.

Motion swept wide of Grindlay in response, with Nicky Low and Chris Templeman also pressing hard, before Ross Campbell replaced Low for the Loons on 78 minutes.

Then Mark Gilhaney burst through the away defence for Dumbarton. He was one-on-one with goalie Paterson, but took just a little too much time before trying to put the ball past the 'keeper with the outside of his right foot. His effort was blocked and rolled away.

Ally Graham replaced Mptata for Sons on 68 minutes, with Pat Walker subsequently coming on for Prunty with 13 minutes left on the clock.

Graham was soon in on the action when Gilhaney again squared up to Paterson, who had to race speedily off his line to turn the ball back. Graham then tried to chip the 'keeper and the defence, but his worthy effort was headed away.

A punched clearance followed by a fine double-save from Grindlay kept Dumbarton ahead as the Sons back-line came under intense pressure and looked a little rocky, once more, towards the end of the game.

Gilhaney and Graham teamed up well on the near side in another Dumbarton raid, setting up Dargo, who teed-up his shot skilfully but a fraction too late to make the desired impact.

One free kick that swung well over and another strike from Agnew showed late effort from Sons. But Forfar continued to break dangerously as the match neared its conclusion, with referee Stevie O'Reilly calculating rather too much time added-on for the patience of the home support.

In the end, however, the anxious wait for the final whistle was worth it. With Stenhousemuir and East Fife drawing, Dumbarton's 1-0 victory puts them six points clear in third place, with three home games and two away fixtures remaining in the 2011/12 season.