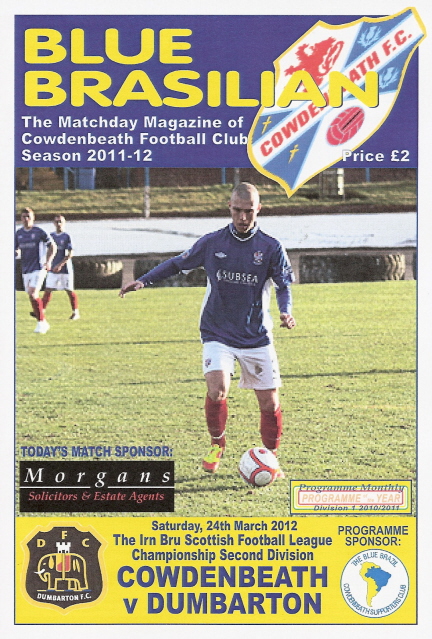 Marc McKenzie and Lewis Coult put the home side 2-0 up, before Craig Dargo got his first goal in a Dumbarton shirt to make it 2-1. Joe Mbu headed another before half time. McKenzie again tapped home towards the end to get his second, and Cowden's fourth.

Both teams struggled to get to grips in the opening stages. Mark Gilhaney and Scott Agnew linked up for Dumbarton on the right hand side, before Agnew let the ball come across his body and fired just wide of the 'keeper's left-hand corner from 18 yards.

Cowdenbeath nearly went 1-0 up through a long throw. The ball was launched in, before deflecting off Paul Nugent's head, looping over goalie Stephen Grindlay and hitting the top of the net.

Cowdenbeath did, however, find the opening goal on 19 minutes. A corner was whipped into the box, and McKenzie side-footed home through Grindlay's legs. The ball was nearly hooked away by Scott Agnew on the line, but it still went in.

It was nearly 2-0 seven minutes later. The ever-present Coult linked up with ex-Son Liam Cusack. However, Grindlay in the Dumbarton goal made a good save.

Three minutes later, the Blue Brazil had their second. The ball broke to Coult after a deflection, and he had no problem in firing into the bottom corner from 12 yards.

There was an immediate response from Dumbarton. Craig Dargo nipped in after a rare mistake from Cowden centre-back Joe Mbu. Dargo's first shot was blocked by Mbu, but the second one trickled past 'keeper Flynn into the bottom corner to halve the deficit at 2-1.

Another goal came some seven minutes later. A late foul from Agnew gave Cowdenbeath a free-kick 35 yards out. The ball was floated in, and Mbu flicked on the ball to compensate for his error, and make it 3-1.

Dumbarton started to create more chances after this. Ryan Finnie and James Creaney were working hard up either wing. Sons managed to force free kicks, but they were either blocked, or saved by Coult in the Cowdenbeath goal.

There was a massive opportunity for Sons right on the half-time whistle. Bryan Prunty, Dargo and Gilhaney linked up on a counter-attack. Prunty managed to get in behind the defence, but he couldn't quite shrug the defender off his back. He lost his balance and his shot bobbled wide.

Dumbarton came out in the second half as they ended the first: playing fast paced, counter-attacking football.

Gilhaney and Prunty linked up well on the edge of the Cowdenbeath box. However Gilhaney let the ball come across him a fraction too much and his angled shot was comfortably saved.

Sons continued to pile pressure on Cowden, but the final ball was just getting away from the front men. Dumbarton also managed to force several corners, though none of them proved any threat to the Blue Brazil defence.

Pat Walker and Ally Graham replaced Ryan Finnie and Bryan Prunty for Sons on 79 minutes. The idea seemed to be to try to offer something different up front.

Cowdenbeath rarely threatened in the second half, but when they did they made good use of it. On one occasion a hard, low ball was knocked in by McKenzie after the visitors got in behind the Sons defence.

It should have been 5-1 towards the end. Cowdenbeath were attacking down the opposite flank this time, and firing across the goal. But Coult fired straight at Grindlay from six yards out.

Overall, it was another disappointing afternoon for Dumbarton. March has been a bad period results-wise for Sons, but they will be hoping to end the month on a high, with more points and goals against Forfar at the Rock next week.