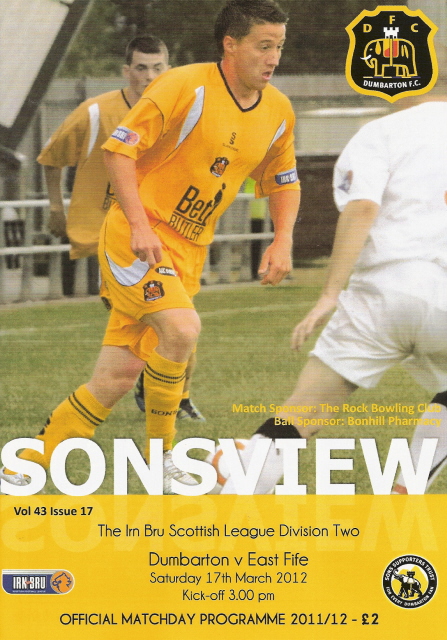 DUMBARTON'S hopes of getting back to winning ways after successive defeats at the hands of high-flyers Cowdenbeath and Arbroath took a severe battering at home to East Fife, as the visitors ran out easy 4-0 victors.

The serious damage was done in two short periods of the first half, and one lapse in the second.

“We have to accept responsibility,” commented Sons manager Alan Adamson afterwards. “We didn't take our chances, and we made mistakes.”

East Fife threatened early on, with one shot over the bar. Then after four minutes they were in front. A simple flicked on corner and header by Ryan Wallace found Sons' defence slow to respond, following Scott Dalziel's initial run. 1-0 to the Fifers.

Dumbarton pushed back with a great move involving Mark Gilhaney and Pat Walker, who turned the ball on to new striker Craig Dargo. His sharply angled effort across the face of the goal went just wide.

This turned out to be the first of many near or missed chances in a half that could easily have boasted six or seven goals.

Next up for Sons was Scott Agnew, who rounded East Fife's Scottish under-21 goalie Michael Brown, but then chipped the ball over from a very tight position.

Moments later another attempt was squirted just wide, with Dumbarton showing menace by getting in behind the visitors' back line on three occasions

It was not all one-way traffic, however. At the other end Dalziel swept across the face of Stephen Grindlay's goal, but missed. From a further corner Darren McCormack also chipped wide.

Sons could have gone level through a trademark Agnew free kick that was tipped over by Brown. Dargo had a further chance when the ball came to him straight from the 'keeper's throw, but his instant strike-back was readily dealt with. He had more time than he thought.

Disaster struck on 23 minutes. East Fife's Robert Sloan swung in a corner and Grindlay, who has saved Dumbarton on numerous occasions this season, fumbled the ball into his own net to make it a 2-0 deficit.

This proved to be a hammer blow. Just one minute later, the Fifers were 3-0 ahead when Wallace found himself in space, striking a 25 yard shot which went wide of the 'keeper and in to the bottom corner of the net.

To their credit, Sons came straight back but just could not find the goal. A Dargo near post chip went wide. Martin McNiff's long throw landed square at the feet of Walker, but Brown blocked his shot.

In between, the visitors' Andrew Cook went hurtling down the wing before he was stopped by a well-timed tackle.

Scott Agnew had another punt for Sons, but it was clutched from danger by the in-form East Fife 'keeper – who also went on to make an astonishing save from Dargo at point blank range. The assistant's offside flag meant that it wouldn't have counted in any case.

On 40 minutes another flowing move for Dumbarton, who were showing glimpses of promise but failing to sustain or capitalise on them, ended with Agnew shooting well over the bar.

The game was turning into something of a stop-start affair, with both teams having plenty of opportunities. Bobby Linn and Ryan Wallace made further attempts for East Fife, but did not add to the score line.

Without managing to grab a goal back before half-time, Dumbarton had given themselves a mountain to climb. And so it proved.

After the break, the visitors slowed the game down and marked tight to deny Sons the opportunity to play the kind of flowing game they enjoy and benefit from. The final pass was also missing on several occasions.

Scott Agnew had another drive saved by Brown after turning the ball onto his favoured left foot.

On 51 minutes the match was effectively ended when Scott Dalziel left the Sons back line standing, beat Grindlay and giving East Fife an unassailable 4-0 lead.

It never looked as if Dumbarton would get back into the game after this, though the chances continued to arrive.

Alan Lithgow's head on was flicked forward by Dargo and hit the post. Then an Agnew cross was deflected forward by Walker but stopped by Michael Brown yet again.

In an attempt to alter the dynamic, Sons' gaffer Alan Adamson brought on Ally Graham and Dominic Kennedy for Tony Wallace and David Gray. But little changed.

On 72 minutes Pat Walker and Craig Dargo combined well and had the ball in the net for Dumbarton, stroking artfully past Brown after a good lay-off. Unfortunately an immediate yellow flag kept it off the score sheet.

Two minutes later centre forward Bryan Prunty, still less than 100% fit, came on for the exceptionally hard working Walker. It was the last shake of the dice for Sons.

Agnew latched on to a Dargo through ball, and tried to chip Brown, but the East Fife goalie denied him once more.

Shortly afterwards, in the most bizarre incident of the game, Dumbarton's lack of fortune in front of goal was well summed up. An Agnew corner went straight past Brown and found Dargo on the goal line. With barely an time to react, it nudged off his shoulder and over the bar, when to the onlooker it seemed that going into the net would have been far easier.

The Fifers had two more scoring opportunities of their own after that, one of which Dalziel should certainly have put away. For Sons, Prunty hit the bar with the last serious chance of the game for the home side.

In the end Gordon Durie's new charges held on to their 4-0 lead comfortably, edging themselves into contention for a promotion play-off place – though they remain seven points behind Dumbarton, who stay in third place. Sons are also four points ahead of Stenhousemuir.

The game and result was a definite disappointment to the home support, which included four Sons fans from Switzerland who had flown over especially for the game.

Even so, Dumbarton remain strong play-off favourites, provided they can regain goals and points over the next seven matches.