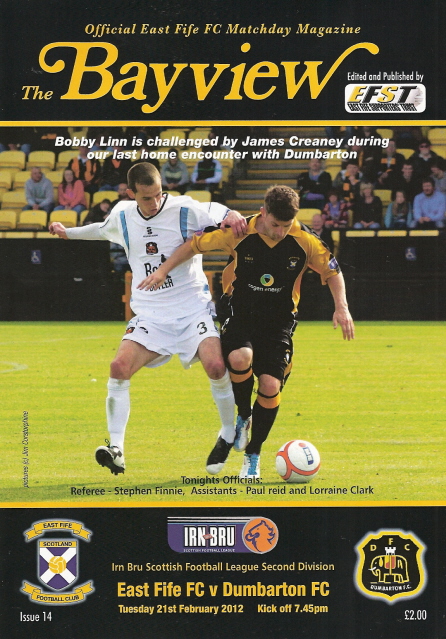 The game began at a lively pace in near perfect conditions for evening football. The pitch was in good condition, the wind had abated by kick-off, and the night air was crisp but not biting.

Sons broke at pace early on, but East Fife counter-attacked quickly – establishing a pattern that was to reassert itself throughout the match.

The first chance of the game fell to the home side's Bobby Linn on 4 minutes, but he skied the ball over the bar.

At the other end, Michael Brown in the Fifers' goal collected Scott Agnew's scuffed shot comfortably.

In the first half hour Sons were second to too many balls and were struggling to retain possession in the middle of the park, as East Fife pressed forward.

Dumbarton goalie Stephen Grindlay made the first of an important series of saves when he dived at the feet of Scott Dalziel, denying the No. 9 a clear goal scoring opportunity.

When Sons did push forward they could not quite find the final touch or shot. Pat Walker combined well with Agnew, who turned artfully on the edge of the area and was narrowly dispossessed before he could strike.

A corner from Mark Gilhaney swished dangerously across the home side's area, but ended up going out of play on the other side of the pitch.

Linn again menaced for East Fife, without really threatening Grindlay. Then suddenly the hosts took the lead on 23 minutes, confirming their superiority at this stage in the game.

Ryan Wallace floated a tantalising ball over the top to Linn, who finished neatly inside the area, low and to the right.

With a 1-0 lead, the men from Fife had their tails up and looked to capitalise on their advantage. Darren McCormack broke for them, but was caught offside.

Sons attempted to steady the game. There was good movement from Gilhaney and Tony Wallace, but no end product.

The ever-dangerous Bryan Prunty came close to levelling for the visitors. His fierce shot was brilliantly tipped over by Brown.

In what was becoming an end-to-end encounter, Ryan Finnie shot from the edge of the box for Dumbarton, but his effort was well over.

A Sons defensive error looked as if it would cost dear when Dalziel burst through the exposed back line. However, Grindlay came to the rescue with a fine, diving stop at his feet.

Moments later Grindlay was in action again, this time denying Robert Sloan. East Fife's tactics were clearly to pack the final third and move quickly out of midfield on the break.

Assistant referee Lorraine Clark was sharp and accurate on her offside calls, to the frustration of the home fans. McCormack was caught yet again.

East Fife was looking more like the team in third position. Sons were showing flashes of inspiration in response, but their moves were fizzling out in front of goal.

Then a fantastic, sharply angled shot from Scott Agnew produced an equally impressive one-armed reaction save from Michael Brown at the near post.

Wing-back James Creaney managed to pull back an excellent cross from the goal line, but no one was able to get on the end of it for Sons.

Before the end of the half, Grindlay pulled off a further top-class save from a speedy Dalziel, following a swift cross from Ryan Wallace.

East Fife, still 1-0 up at the break, brought John Overstone on for defender Steven Campbell at the start of the second half.

The pulsating pace of the game soon resumed. Pat Walker broke through, but his high shot was tipped over. From the resulting corner the Fifers' broke back.

Then on 52 minutes Dumbarton drew level at 1-1 through a well-timed strike by Mark Gilhaney, which took a slight deflection past Brown.

It was 'game on' for Sons as a misty rain began to fall. Youngsters Mark Lamont and Ally Graham replaced Finnie and Walker on 56 minutes, with the visitors sharpening their 4-4-2 shape and Gilhaney and Prunty continuing to look threatening.

Not long afterwards Hislop side footed past Dumbarton's far post, but only after a Gilhaney corner had skidded off the bar at the other end.

Prunty, Agnew and Walker combined for Sons on the next raid. Agnew had a really good chance in front of the Fifers' goal, but he looked for one touch too many rather than striking immediately.

Paul Nugent pulled off a great headed clearance for Sons as the home side pressed straight back.

The best means of defence was proving to be attack for Dumbarton. Ally Graham, who looked instantly dangerous in making fast, intelligent runs, was frustratingly ruled offside. East Fife survived a corner and goalmouth scramble – just.

Sons were soon rocked back by McCormack, but he squirted his shot wide. Then at the other end, Agnew unleashed a lightening strike for Sons. It hit a defender and home 'keeper Brown plucked the ball out of the air.

Prunty almost made it three moments later, after which the visitors looked to show composure and slow the pace down a little.

East Fife were not going to let go, however. It took another well-judge Tony Wallace tackle to keep them at bay on 84 minutes.

Ryan Borris replaced Prunty, who had taken a knock, on 85 minutes. Ally Graham almost added a second goal as he caught the Fifers' defence off pace. Brown just managed to tip his shot over.

Dumbarton's loyal band of travelling supporters greeted the final whistle with a huge cheer. It had been a thrilling game and a deserved three points. A significantly improved second half performance by Sons made all the difference.