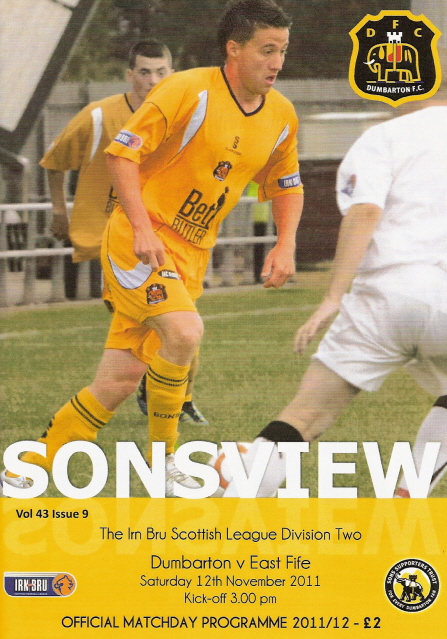 DUMBARTON secured a convincing 3-0 home win over East Fife, completing an impressive 'double' in the first half of the season – having beaten the Fifers 6-0 away at New Bayview.

This time, in contrast to last week's game at Arbroath, it was two second half goals that secured the victory for Sons, rather than three conceded in the first half that signalled defeat.

In the opening period, Dumbarton dominated possession for long spells and looked much more secure at the back, with Alan Lithgow and Martin McNiff putting in solid displays in central defence, and Paul Nugent and James Creaney making important tackles at crucial times throughout the game.

Sons went straight into attack, though Scott Agnew's first effort was well over. For the visitors, David Muir spooned into Sons goalie Jamie Ewings' hands. Minutes later he made another good save from a Ryan Wallace free kick.

Ryan Borris made a series of forays for Dumbarton down the left wing, seeking to get the ball onto his favoured right foot. Within the first quarter hour he took a couple of speculative shots, but throughout the half Sons struggled to create clear-cut opportunities.

Tony Wallace pushed forward for Dumbarton, and Bryan Prunty and David Winters combined well up front. In one sequence Dumbarton enjoyed three corners in a row after concerted pressure on the Fifers' back row.

On the half hour, East Fife's Steven Hislop outpaced Sons' defence and put in a searching cross on the goal line from the left, but there was no-one there to convert the opportunity.

Then on 34 minutes Sons were ahead from a trademark Scott Agnew free kick in a central position just outside the area. The ball curled round the wall and into the top corner of the net, giving the visitors' 'keeper, Michael Brown, no chance.

Sons kept up the pressure, and six minutes before the break McNiff could have made it two, but his header went just over.

East Fife came out fighting at the beginning of the second half, pressurising the Dumbarton goal straight away. A scramble on the goal line almost produced an equaliser, but Sons defended determinedly and the assistant's flag went up for offside.

Then the busy Mark Gilhaney burst through for Dumbarton. He was one-on-one with goalkeeper Brown. The angle was tight and his strike ended up being neither a full-blooded shot nor a cross.

Four minutes later Gilhaney supplied Prunty, whose well-taken sidefoot shot was just cleared by the Fifers. Winters also missed a good chance right in front of goal as Sons pressed for a second.

Agnew almost added to his account minutes later. First it appeared that he had lost the ball 25 yards out. Then he made a fine recovery, deceiving several defenders with a weaving run before unleashing a fabulous shot that produced an equally impressive save from Brown. It would have been the goal of the game.

Borris followed up with a dipping punt. Again, the'keeper was up to it. But on the hour he could do nothing to prevent Sons making it 2-0, as Gilhaney pounced on the ball and hammered it home after a shot from Prunty had been pushed away.

East Fife re-organised and made two substitutions. But there was no stopping Dumbarton. Following another Agnew free-kick, Alan Lithgow, who had been commanding at the back, deservedly claimed the home side's third goal, courtesy of a slight deflection.

Pat Walker replaced Winters for Sons with around 20 minutes remaining, and was soon industriously combining with Gilhaney on the left.

On 75 minutes Jamie Ewings fumbled an incoming ball from the Fifers. However he made a prompt recovery and moments later produced another quality parry to deny the visitors a consolation goal.

Nugent also produced an extremely well-timed tackle in the final moments, as Sons maintained control of the game right trough to the end. The clean sheet at home was as encouraging as the goals. The 3-0 win puts Dumbarton into fourth place in a tight Irn Bru SFL Second Division.