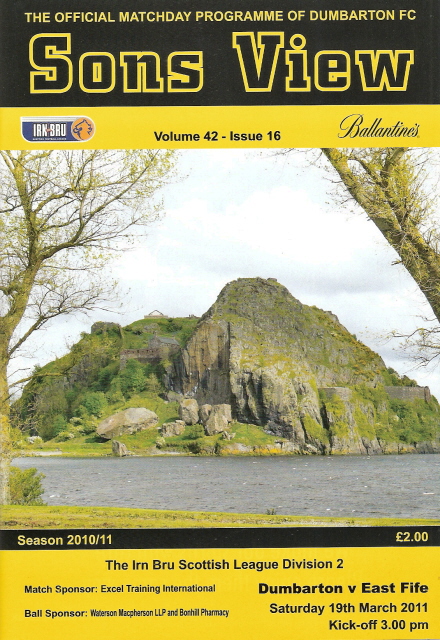 IN a match which began scrappily, but turned into an end-to-end encounter in the second half, Dumbarton beat East Fife 4-2 at SHS, re-establishing their strong recent form.

Interim manager Alan Adamson said: "The game against East Fife was another where you could maybe say we would have lost earlier this season. We were a bit shaky in the first half but came into it in the later stages, and the equaliser gave us a foothold in the game. We just said to the players to carry on what they were doing in the second half and they did that emphatically."

It took both teams a while to settle in and find their pace. On 7 minutes it looked as if Pat Walker had found Jon McShane in space inside the East Fife box, only for the big number 9 to lose his footing just as the ball came in.

Moments later Sons' Stephen Grindlay pulled off a polished, diving save from a dangerous and low incoming cross at the other end.

Mark Gilhaney, Pat Walker and Jon McShane all looked threatening up front for Dumbarton, but the home team's long balls and occasional uncertainty in midfield conceded possession too often.

Sons gradually began to impose themselves on the game, despite a couple of stoppages, but could not find a breakthrough.

Then on 27 minutes a slip in the area by defender Iain Chisholm allowed the Fifers' Bobby Lynn to twist, turn and slot the ball efficiently past Grindlay. 1-0 to the visitors.

A quick switch of wings over to Gilhaney, a cut inside and a sharply-angled shot from the busy number 7 almost pulled Sons level, but Michael Brown in the East Fife goal was equal to the task — as the home side began to rediscover their fluency.

Two corners followed and Dumbarton continued to pile on the pressure. Ryan McStay came close again. Then on 41 minutes Andy Geggan equalised for Sons with a beautifully flighted header, lobbing the East Fife keeper from an acute angle on the edge of the penalty box.

In the second half, Dumbarton began with determination, but East Fife pushed back. Then on 51 minutes Jon McShane let loose a superb, driving shot from 20 yards. It flew past Brown's despairing hands and into the far corner of the net to put Sons 2-1 in front.

Another fine passing move from midfield ten minutes later put Martin McNiff through. He manfully fought off his marker, but could not quite steady himself before the shot, which fizzled wide on the right.

Then just as Dumbarton began to look well in control, East Fife broke forward, and finding himself with plenty of space, Craig Johnstone struck a commanding volley past Grindlay to make it 2-2.

Sons did not give up, however. On 68 minutes Pat Walker burst through after a lucky break. He looked set to shoot, but seeing Brown advancing fast chose instead to sweep the ball out to Mark Gilhaney, who steamed it into the bottom corner of the Fifers' goal to restore Dumbarton's lead at 3-2.

It got better for Sons on 77 minutes, as Jon McShane latched on to another sharp Sons attacking move, placing a swinging ball past the visitors' keeper. It was 4-2 to Dumbarton, and a deserved second goal for the industrious striker — who was named sponsor's man of the match.

The victory gives Sons renewed impetus and confidence for the vital remaining eight games of the season.